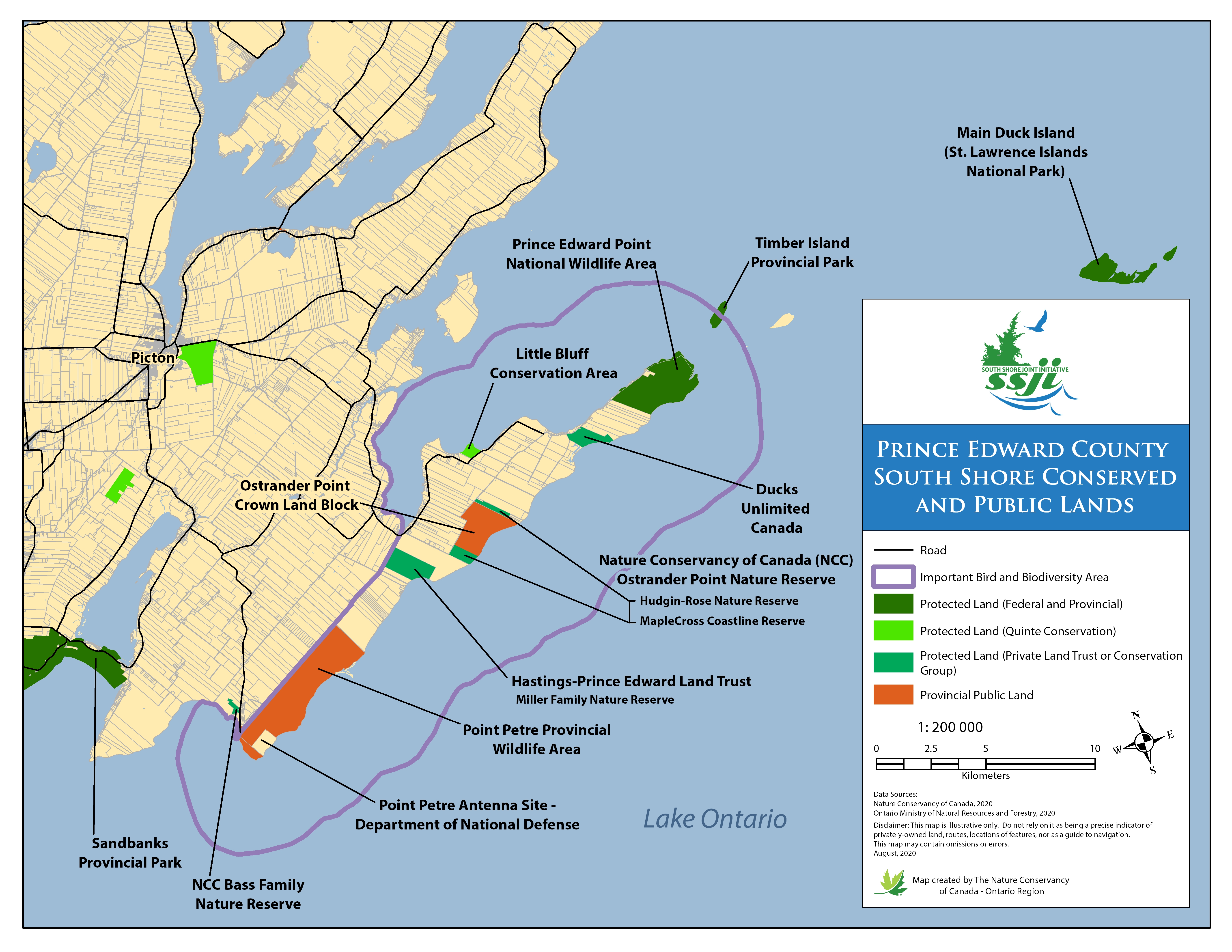 South Shore Joint Initiative’s (SSJI) area of interest and work is the Prince Edward County South Shore Important Bird and Biodiversity Area delineated on the map above by the purple line.  The IBA is composed of 6040 ha of land and 21,891 ha of near shore water.  The areas of private and public protected lands in the South Shore have recently been increased by Minister of Environment Conservation and Parks, Jeff Yurek’s announcement on September 10 of the intention to designate Ostrander Point Crown Land Block and Point Petre Provincial Wildlife Areas as a Conservation Reserve.  This added to the Prince Edward Point National Wildlife Area, Little Bluff Conservation Area, Miller Family Nature Reserve owned by the Hastings Prince Edward Land Trust, Hudgin-Rose Nature Reserve and MapleCross Coastline Reserve owned by Nature Conservancy of Canada brings a total of 2428 ha of protected land in the IBA.

SSJI’s area of interest is encompassed by Natural Feature Area K – identified as the South Shore.  We commend the decision to include delineation of Natural Features in the Official Plan and are also pleased that the plan shows natural corridors or linkages, both to area K and throughout the County.  We are pleased that the natural linkage to the Black River wetland complex as well as the linkage on the other end of area K to the Outlet are included.

SSJI suggests that new larger scale residential, commercial or industrial development is incompatible with any Natural Core Area or Linkage.

Although not in our area of interest, SSJI is concerned that one provincially significant wetland is omitted on the Natural Features & Areas Draft. It is important, as we pointed out in our submission to the 2018 Draft Official Plan, that the Provincially significant wetland at Slab Creek and its linkage to Pleasant Bay be included in the designated Natural Core Areas as part of Area E.

In the Official Plan section Natural Core Areas page 25 14) The County will work with Quinte Conservation and other partners.  SSJI suggests that other partners could be named such as Hastings Prince Edward Land Trust, Nature Conservancy of Canada, Ontario Ministry of Environment, Conservation and Parks and Environment and Climate Change Canada.  Doing this provides specific information for staff and Council should it be needed.

The land use designations shown on Schedule A-4 are somewhat out of date because the Hudgin- Rose Nature Reserve and the MapleCross Coastline Reserve, recently purchased by Nature Conservancy of Canada are not included on the map.  Also not included but immediately adjacent to the IBA is the Bass Family Nature Reserve similarly owned by NCC.  The small strip of land shown as not part of the National Wildlife Area has recently been purchased by Environment Canada’s Canadian Wildlife Service.

SSJI supports the “strong environmental protection and sustainability management practices” promised by section 3.1.7, 3) b) of the plan.

Following are some specific comments on areas of the plan:

Wetlands clean the water that flows through them, act to mitigate floods, recharge underground aquifers, provide water during dry seasons and store water at wet times of year. Wetlands are important throughout the County. Of particular importance along the uninhabited areas of the South Shore are the 2 large wetlands created by Ducks Unlimited in the 1980s. There are many coastal wetlands that in addition to their climate moderating function provide habitat for species at risk and migratory birds bats and butterflies.

Wetlands must have high level of protection throughout Prince Edward County.  As a documented very dry area, our water sources and their functions are of utmost importance to climate, agriculture, wildlife and human livelihood.

From page 26 of the Plan “Development should not be permitted within an identified wetland-other feature within 30 metres unless EIS demonstrates no negative impacts”.

And yet in the Glossary on page 156 we find “Other coastal wetlands adjacent land width 50 metres” from adjacent development.

Areas of Natural and Scientific Interest

The South Shore contains Areas of Natural and Scientific Interest (ANSI) and candidate ANSIs that have been identified by the Ministry of Nature Resources and Forestry.

Since categorizing ANSIs has been very slow in the last few years due mainly to down-sizing at the ministry, SSJI recommends that candidate as well as already designated ANSIs deserve the highest level of protection. Until candidate ANSIs have been verified, they should be given the same level of protection as already designated ANSIs. We believe that this should be effective, not only for the South Shore but also for the entire County.

Areas of woodland occur throughout the South Shore. As described in the Plan woodland areas are important for climate moderation and improve the quality of air and water.

The woodlands of the South Shore create important habitat for many species of migrating birds as they rest and forage both in the spring and fall. Studies have shown that upon arrival migrants will forage over a 30 km area, which means that they use the whole South Shore not just Prince Edward Point for resting and rehabilitation during migration.  SSJI supports the development constraints of 120 metres adjacent to significant woodlands.

The land area of the South Shore area is surrounded by shoreline habitat.

The habitat is important for fish, birds and other wild life and also is important for human recreation.  We note the recommendation for development to be set back 30 m from the high-water mark and question if that is far enough given the recent experience with spring and summer flooding. We agree that public access to the shoreline is important, but note that especially along the South Shore there has been misuse of the current road allowances and open space lands and destruction of habitat.  Although we are not in favour of closing road allowances, we urge the municipality to work with provincial and federal ministries and private land owners to find solutions to misuse and destruction.

Much of the South Shore is wildlife habitat.  Public and privately owned protected lands exist to offer refuge from development for species at risk and all wildlife. Forty-one species at risk – amphibians, birds, fish, insects, mammals, plants and reptiles have been documented in the South Shore.  These species and all wild creatures live in and reproduce in the woodlands, wetlands, grasslands and surrounding water of the IBA. Protecting and enhancing the ability of these wild creatures to live and reproduce supports biodiversity.  Every species contributes to a healthy eco-system.  The health of the environment and the economy in the County and beyond depends on our protection of these important natural areas and the species that live in them.