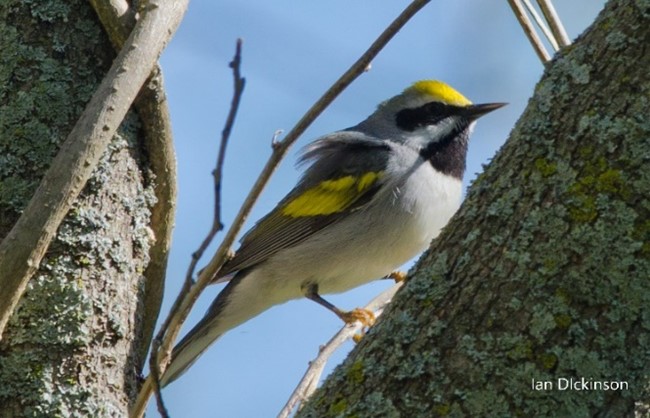 The Golden Winged Warbler is amongst the 30+ species of warbler that will arrive in the county over the next few months. Unlike us unlucky Canadians who are stuck in the cold weather, this species spends the winter in open woodlands and shade-coffee plantations of Central and South America (Free coffee? YUM!).

Adult males and females are silvery gray with golden coloured wing patches. Males have a black throat and mask, golden cap, and two white facial stripes. Females are more muted, having a greenish yellow crown and a dusky gray throat. Watch your step! The Golden-winged Warbler is a species of ground nester. After spending some time breeding in shrubby habitats like regenerating clearcuts and young shrubs surrounded by mature forests, this warbler will then build its nest on or near the ground (one of the few warbler species to do so). Once their young have fledged, they will move into nearby woodland to continue raising their young. Over the early summer months, you can hear the males of this species sing their loud song repeatedly (Learn their calls). This species is considered a species of Special Concern in Ontario and Threatened in Canada. They have suffered one of the biggest declines in population of any songbird species over the last 50 years.  Several different issues have affected this warbler including loss of habitat and nest parasitism by the Brown-headed Cowbird. Cowbirds lay their eggs in the warbler’s nest and the warbler parents take care of the young, at the expense of the warbler’s own offspring. 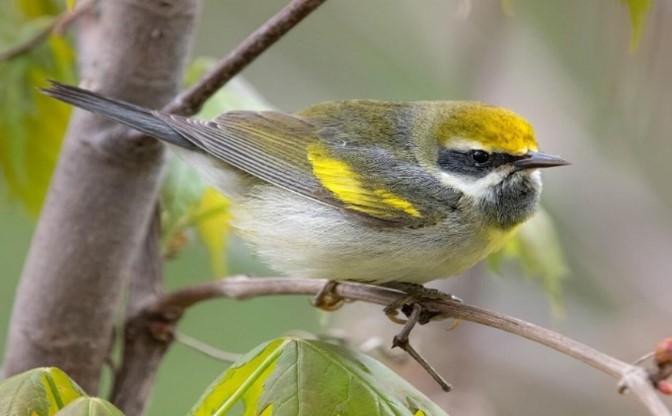 An interesting threat to this species, however, is the hybridization between this warbler and the Blue-winged Warbler. As the Blue-winged has expanded its home range, it has begun breeding with the Golden-winged Warbler, creating two hybrid species. These are the Lawrence’s and Brewster’s Warblers. When these hybrids sing, their songs aren’t a mix of the two species, but instead they sing either the normal songs of the Blue-winged or the normal songs of the Golden-winged. Occasionally pure-looking parental types sing the “wrong” song! (All About Birds).

Want to learn more about the birds that frequent the South Shore? Check out Prince Edward Point Bird Observatory and their Spring Birding Festival happening in May!