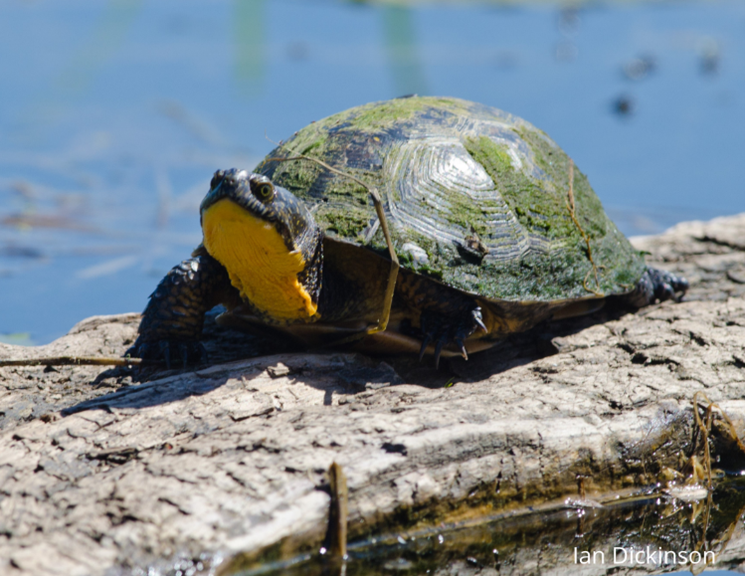 What better way to celebrate the recent announcement of the South Shore Conservation Reserve Public Consultation than to have this edition’s Species at Risk profile be on the Blanding’s Turtle, the unofficial species that ‘started it all’ when it comes to protecting the South Shore!

One of the most easily identifiable turtles in Ontario, this beauty has a domed shell that resembles an army helmet and a bright yellow chin and throat. It’s carapace (the upper portion of the shell), is usually black or brown with light speckles of yellow. The bottom part of a Blanding’s turtle shell (plastron) is hinged, so when it feels threatened, it can close its shell! Males have a more concave plastron than females, and a thicker tail, with their cloacal opening (the common orifice of the digestive, reproductive and urinary systems) is located beyond the edge of the carapace. 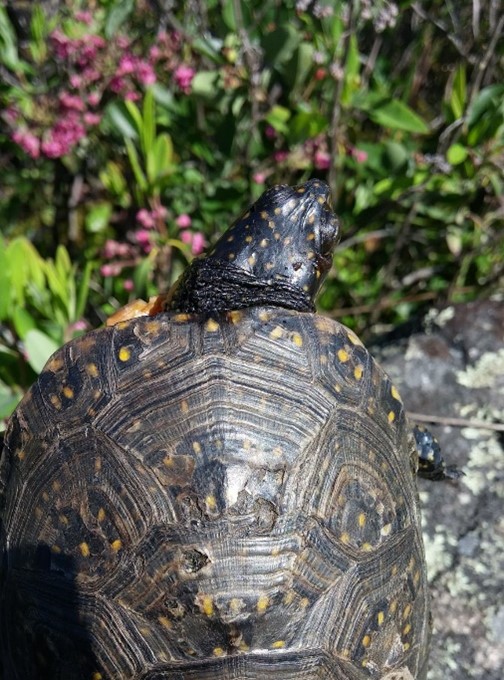 Although there are isolated populations in both Canada and the United States, most Blanding’s Turtles are found along the Great Lakes Basin. They prefer shallow water with mucky bottoms such as wetlands, although you can sometimes find them in small lakes and ponds. This species is omnivorous meaning that eats both plants and animals. Their choice animals to eat are crustaceans, frogs, insects, and fish.

Considered by both the federal and provincial governments as ‘Threatened’, this species faces numerous obstacles back to a stable population. Loss of habitat, road mortality, egg predation and motor vehicles have all contributed to the decline of this species. The most recent population estimates for Ontario are between 25,000 and 45,000 individuals (2016). Blanding’s Turtle females don’t reach maturity until at least 14-years-old and very few eggs laid by turtles in general, survive, meaning that every adult female is crucial to the survival of this species.

I’m sure the Blanding’s Turtles in the South Shore are stomping their feet in celebration of the new Conservation Reserve proposal that would mean protection of their habitat! Listen to the traditional Anishinaabe story of “The Turtle with the Sun Under Its Chin” as shared by Toronto Zoo First Nations Conservation Steward, Taylor Tabobondung.