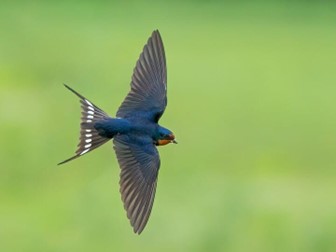 What’s that bird swooping overhead when it’s buggy out? It might just be a Barn Swallow!

The Barn Swallow (Hirundo rustica) is a medium-sized songbird with a short bill, that has a dark blue back and a rusty cinnamon red-coloured face, while white spots can be seen on it’s tail while this species is in flight. It has a deeply forked tail, with the female’s tail being slightly less forked and its body colouring having a slightly muted appearance compared to the males. When perched, the Barn Swallow looks cone shaped with broad shoulders that narrow to long pointed wings.

Fun Fact: Barn swallows are long-distant migrants who spend their winter in parts of Central and South America, and have been found as far south as Argentina — 9,000 kilometres away!

Barn Swallows build their cup shaped mud nests on man-made structures such as old barns and under bridges (check out one being built). The species is attracted to open structures that include ledges where they can build their nests, which are often re-used from year to year. They prefer unpainted, rough-cut wood since the mud does not adhere as well to smooth surfaces. Barn Swallows have commonly nested in the IBA and surrounding area. When raising their young, parents will sometimes get help from other birds to feed them. They are usually siblings from previous clutches, but unrelated juveniles may help as well.

Barn Swallows feed while in flight, snagging insects above the ground or water to heights of 33 m or more. They can execute quick tight turns and dives to secure a meal! If you want to catch them in action, be on the look out in the early morning or evening when flying insects are out and about.

The Barn Swallow is considered Threatened in Ontario, with an estimated 350,000 left in the province. Though the decline of this species here is not well understood, it is thought that the loss of available nesting sites in old open barns, and foraging habitat in agricultural areas might be one of the factors we are seeing the Barn Swallow disappear. Pesticide use is also thought to be a reason, as insects are a Barn Swallows main food source. You can help the Barn Swallow by building a nest shelf (Instructions Here).

To learn more about Barn Swallows, and other birds that can be found in the South Shore check out our partners Prince Edward Point Bird Observatory and Birds Canada for more information.