Saving Grace - the Science and Stewardship of Saving Turtles

This memorized atlas will last them the rest of their lives, which can be upwards of 200 years for Snapping turtles and over 400 years for smaller turtle species. However, the ability to make a map seems to deteriorate with age, and moving a turtle from its territory can be devastating because the stress of disorientation along with the ceaseless attempts to find a way home may lead them to stop eating, but also may send them across new and dangerous roads. 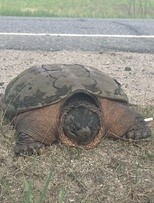 Historically, turtles were entirely miscalculated. Early settlers likened them to rodents assuming them to be in numerous and expendable. These colonists further thought that turtles competed with fish species or killed too many waterfowl, and therefore the snapping turtle was culled through government order. But we finally know better- after significant research and integrating Indigenous Traditional Knowledge, it is understood that turtles are truly exceptional.

It takes approximately 60 years to replace just one turtle in nature. This is because turtles take about the same time as humans or longer to reach sexual maturity (between the age of 8 up to 20), and then they have a very low recruitment rate (the percentage of eggs that hatch and succeed to reach adulthood) which is about 0.06%.

Older turtles are more fecund; meaning they lay more eggs as they age and they have fewer natural predators. Therefore, these adults are essential to keep populations stable.

However, adult turtles are facing increasing threats by humans, and populations are declining rapidly. The decline is chiefly due to road strikes. Secondary threats include wetland and shoreland habitat losses through filling and degradation, as well as losses to the pet trade and deliberate persecution. Therefore, the most recent assessments indicate that we have lost more than 50% of turtles in Ontario, and in very short order- in less than 50 years. But the decline in populations is not steady- it increases as more adults are lost, and as more roads are improved and installed, and as traffic surges, so that the rate of reduction is escalating. 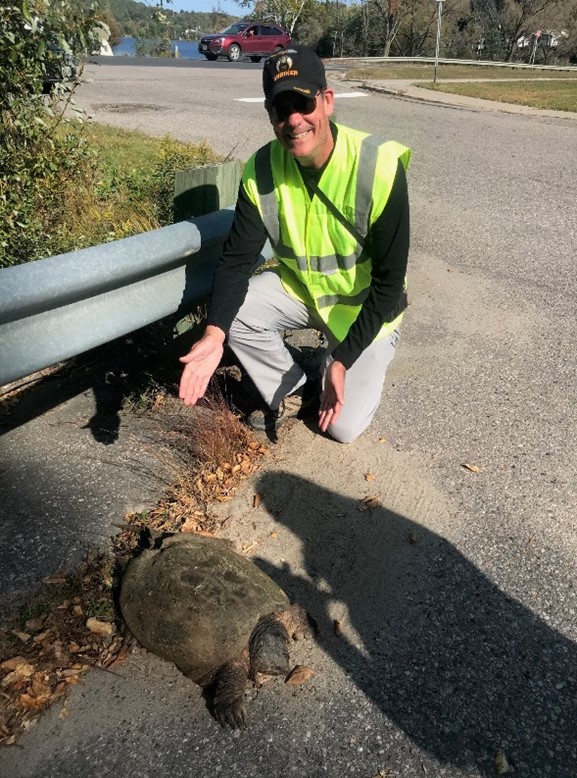 What can be done?

The Turtle Guardians program of The Land Between charity, is an initiative that was founded locally and which operates across Ontario. The effort, dedicated to saving our shelled friends, is grassroots, and works with local volunteers, communities, and kids to save turtles. Turtle Guardians offers training and tools for all skill levels and all ages. You can sign up as Nest Sitter and learn how to construct a nest cage protector, install, and monitor nests and babysit nesting turtles. Road Researchers are volunteers that walk, cycle or drive target roads at least once a week and record turtle activity as well as help turtles that they encounter. Wetland Watchers monitor wetland sites recording turtle and wildlife sightings and habitat features. The newest program, Turtle Crossing Guards, involves taking shifts in mortality zones to record turtles encountered and help them to the other side safely.  Training is provided and includes lessons in how to handle and help snapping turtles (and other turtles), road safety protocols, and how to record data. All data helps the charity and their extensive partners, estimate turtle populations, plan for underpasses and other mitigation measures, and communicate trends and needs with partners and agencies. And of course, the helping hands on the landscape are a direct help to these vulnerable heroes. Turtle Guardians operates under a Species at Risk research permit and in partnership with the Haliburton Road Department, Scales Nature Park, and the Trillium Lakelands District School Board. 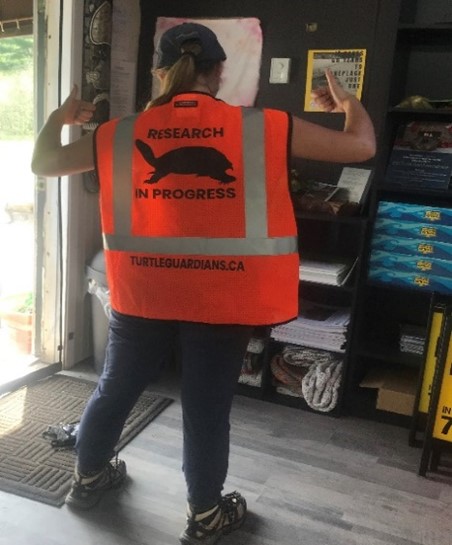 The inspiration for the newest program came from Grace. Grace is an ancient snapping turtle; whose hibernation site is near the Haliburton Highlands Secondary School and feeding grounds extend across 2 lakes at over 40km radius and across busy roads including Highway 118 in Haliburton County.  Grace is likely over 125 years old judging by her carapace (upper shell) size, and could be as old as 200 years according to scientific studies (Armstrong and Brooks). She is the largest turtle the Turtle Guardians, have had the honour of meeting in Haliburton county. She is 39cm, which is very close to the record size found in this area of Ontario that we know of at 42cm.  Grace is not only notable because of her size, but she is missing her right eye. Grace is named for the absolute miracle of her longevity and existence without significant injury or death in this busy area of roads and boats.  But Grace is not the only elder to watch out for. Therefore, when travelling on the local roads, drive defensively with relaxed eyes focused ahead. Turtles often cross between two low lying areas, where they feel safe.

Help Turtle Guardians by volunteering and also by donating. The program is raising funds for the Crossing Guard program, to pay for high visibility vests, signage to bookend key sites and keep drivers, volunteers, and turtles safe, and for temporary silt fencing to assist in “slowing turtles”. Also, Guardians are also working to install two pilot underpasses to help turtles cross under roads using existing culverts in candidate areas.  They have launched a GoFundMe Campaign to support these efforts. Please consider supporting their by volunteering: www.turtleguardians.ca/volunteering and by donating: www.turtleguardians.ca/donate or through go fund me at  www.gf.me/u/zqj6zp 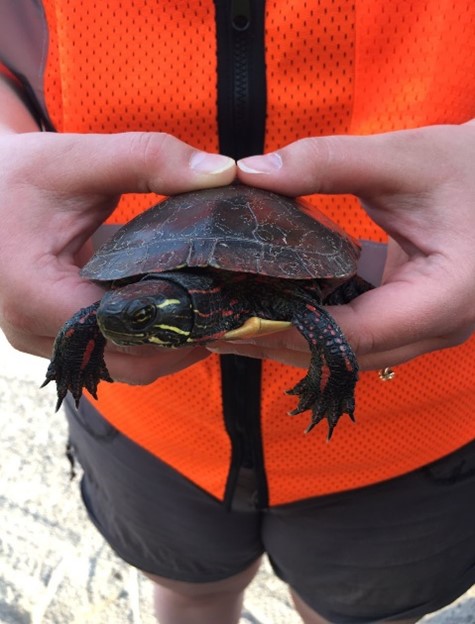