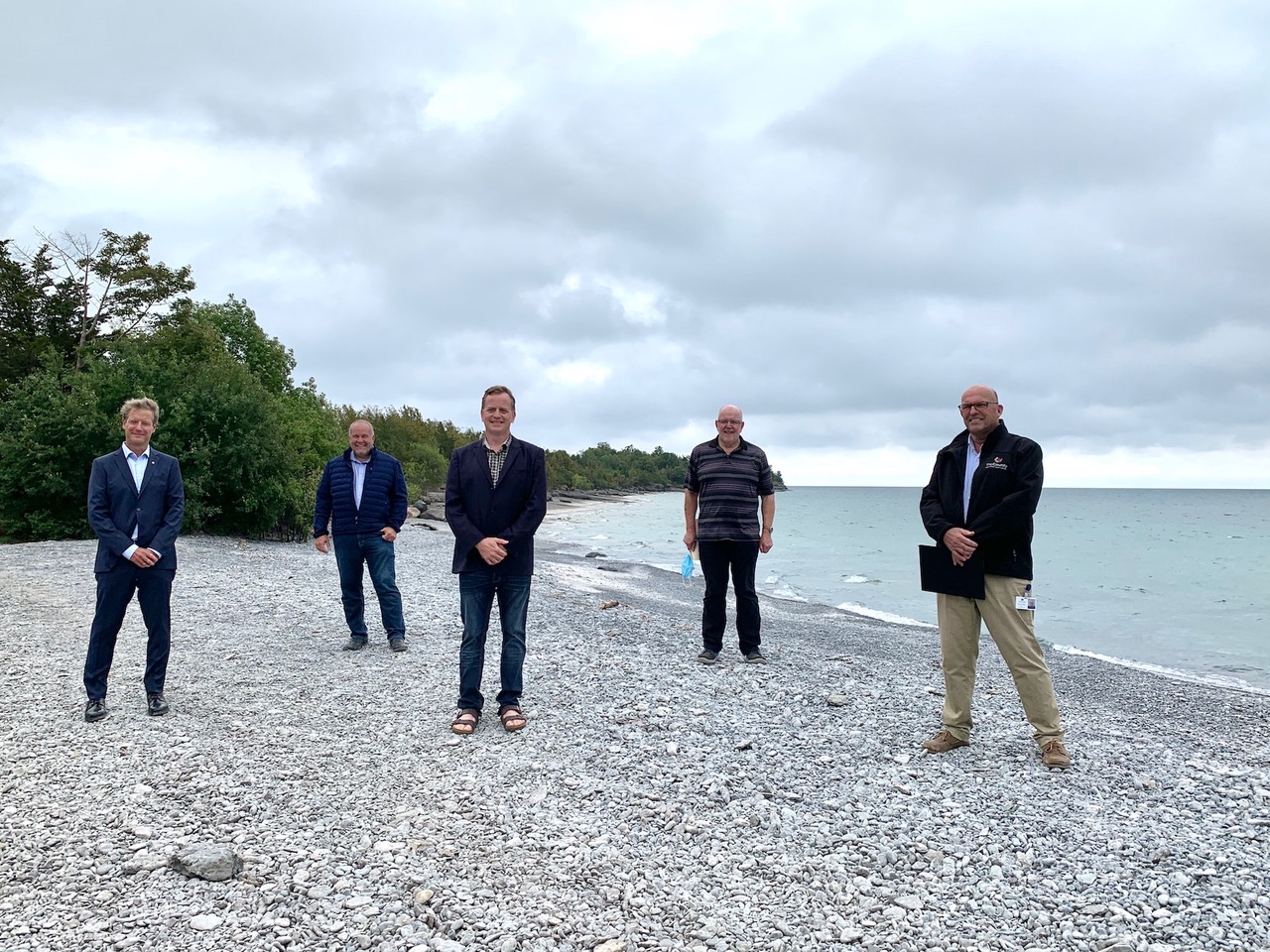 September 10, 2020 – Standing next to limestone shelves on the edge of Lake Ontario, Hon. Jeff Yurek, Minister of the Environment, Conservation and Parks announced that the province is beginning the process to designate Point Petre Provincial Wildlife Area and Ostrander Point Crown Land Block as a new conservation reserve.

Nestled on the shore of Lake Ontario, Point Petre and Ostrander Point cover 4,000 acres and represent the largest and last undeveloped natural landscape and shoreline on the Canadian side of Lake Ontario. An area of remarkable biodiversity, Prince Edward County’s South Shore is home to 33 species at risk including birds, plants, animals and fish.

In the South Shore, Prince Edward Point National Wildlife Area was one of the first sites with protected habitat for migratory songbirds in Canada and highest density of bird migration across Lake Ontario is recorded there. Birds Canada defines the South Shore Important Bird and Biodiversity Area (IBA) as 15,000 acres of public and private land from Point Petre to Prince Edward Point and from Lake Ontario to Hilltop Road and Army Reserve Road.

Minister Yurek shared, "By exploring this initiative for the southern shore of Prince Edward County, the government is following through on its commitment to pursue initiatives like Ontario's Living Legacy, which is one of the largest expansions of Ontario parks and conservation reserves in the province's history."

We are most grateful to The Consecon Foundation and The Gosling Foundation who, along with The Shad Foundation, provided funding to support the community involvement campaign. In addition to many other supporters, I’d also like to thank the 1,600 people who’ve sent letters and emails of support for preserving and protecting these remarkable lands in our County’s South Shore.”

Graham Saul shared, "Nature Canada celebrates this critical step forward. We championed this initiative alongside local conservation groups and we encourage the government to provide a strong management plan for the South Shore that will protect this treasured natural area for generations."

And looking to the future, Peter Kendall noted, "The project in South Shore is creating real economic benefits, providing protection against the impacts of climate change and ensuring local communities can continue to enjoy the outdoor activities that we all love and that have become even more important in a COVID-19 world."

Over the coming months, the province will complete an assessment and evaluation of the site, in collaboration with Indigenous communities and environmental organizations, such as the South Shore Joint Initiative, the Schad Foundation and the Nature Conservancy of Canada.

2020 is a milestone year for South Shore protection. Twenty-five years ago, an International Monarch Butterfly Reserve was designated in the South Shore and annual bird migration monitoring began. For twenty years, the South Shore and surrounding waters have been recognized as an Important Bird and Biodiversity Area. And now, the process to designate both Point Petre and Ostrander Point as Ontario’s newest conservation reserve has officially begun.

The South Shore Joint Initiative is working together to permanently protect and improve biodiversity along Prince Edward County’s internationally recognized South Shore, Canada’s largest and last undeveloped Lake Ontario natural landscape and shoreline. To learn more about the South Shore and how you can get involved, please visit ssji.ca