Birds wander, and when they show up far from home, ornithologists take note. Extralimital records can signal that bird populations are changing, hinting that range expansions may be underway. For birders, these sightings are a source of great excitement. This is the story of one such rarity, a Western Meadowlark recorded at Charwell Point in October 2020 on Prince Edward County’s southern shore[1].

Eastern Meadowlark (Sturnella magna), as its name would suggest, breeds in eastern North America. It is a familiar summer bird in Prince Edward County, with its flashy yellow front and pleasing song a common sight and sound in and around hay fields and pasture land. The Western Meadowlark (Sturnella neglecta) ranges across the west of the continent and is a rare presence in The County. Until the sighting detailed in this report, the last local record of this species was more than forty years ago.

By plumage, the two meadowlarks are nearly identical. Most field guides reference minor differences in the amount of yellow feathering at the base of their bills, and point towards song as being the best distinguishing feature. The songs are distinctive, but of little use after the breeding season ends. During fall migration, with singing done and visual cues minimal, probability takes over. By geographical range, any meadowlark seen in Prince Edward County is overwhelmingly likely to be an Eastern Meadowlark, and on that basis identifications are made.

Charwell Point juts sharply into Lake Ontario from Prince Edward County’s otherwise gently curving southern shore. For birds caught over the lake it is one of the first visible features on the Canadian coast, and an attractive place to make landfall. This unique geography has made it one of the top birding spots in The County, and a location worth checking regularly.

On the morning of October 4, 2020, I was walking the east side of the point when a meadowlark burst up in front of me, a Merlin in hot pursuit. The small falcon’s attack failed, so it was my turn to take a close look. I approached the bird and it flushed several times, making short, unhurried flights before landing amongst the sparse beach vegetation. I assumed it was an Eastern by probability, but photographed it anyway out of curiosity.

In the evening I processed the photographs. While disappointed in their artistic merit, I was pleased to discover they had captured excellent plumage details. With photos in hand, I hit the books. Peterson’s “Eastern Birds” (1999) and Sibley’s “Guide to Birds” (2000) focussed mostly on the extent of yellow feathering near the bill. The National Geographic Field Guide to the Birds of North America (2006) contained a more thorough discussion, including illustrations of the two species’ tail patterns. Flipping between that book and my photos, it slowly dawned on me that the Charwell bird’s tail did not look right for Eastern Meadowlark. Interest piqued, I turned to the internet. A search led quickly to an article on the Cornell University website by Kevin J. McGowan entitled "Differences between Eastern Meadowlark, Sturnella magna, and Western Meadowlark, S. neglecta."[2] 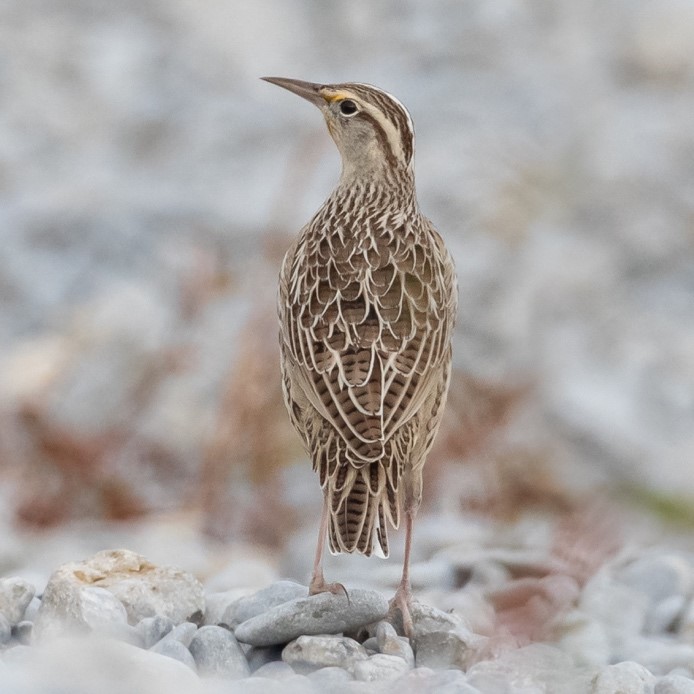 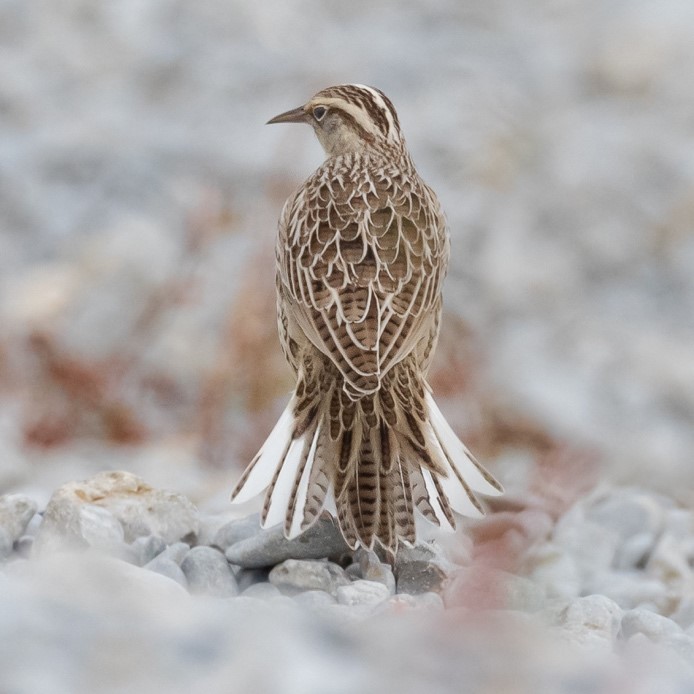 The Cornell article affirmed tail pattern as a diagnostic identification mark, noting that on Eastern Meadowlark the dark centre bars of these feathers are thick and bleed together, whereas on Western Meadowlark the bars are thin and distinct. This was enough for me to enter the record on eBird as Eastern/Western Meadowlark, rather than definitively naming it as the expected eastern species. Upon posting the sighting and accompanying photos, feedback soon flowed in from veteran field ornithologists. They all agreed that while the meadowlark group is variable and field identification by plumage a challenge, the Charwell bird’s appearance was strongly consistent with Western Meadowlark.

With identification now leaning towards the much rarer species, I headed back to the books, retrieving my copy of "New World Blackbirds: The Icterids" by Alvaro Jaramillo and Peter Burke.[3] This text states that “Eastern Meadowlark can be separated from most Western Meadowlarks by looking at the pattern of barring on the tail and tertials: the bars are separate from adjoining bars and parallel-sided on Western Meadowlark, but neighbouring bars join up along the centre of the feather (shaft) on Eastern Meadowlark”. The only exception to this rule is that Western Meadowlarks from the Pacific Northwest can show the darker tail features of Eastern Meadowlark. The book further notes “The extent of white on the third tail feather from the outside (R4) is also important. Eastern tends to have this feather mostly white while on western it is largely dark."

Flipping again between photos and text, the bars on the tertials and tail feathers of the Charwell bird were clearly "separate from adjoining bars and parallel-sided", and R4 was “largely dark”. On October 6, 2020, I revised

my eBird identification to Western Meadowlark, and the bird was subsequently accepted as such by the site’s rigorous vetting process

The Charwell Western Meadowlark was the first eBird record for the species in Prince Edward County in forty years, the previous appearance being a sighting in May 1980. The rarity was new to my all-time County bird list, and it was my 224th County bird for the year. Beyond the trivial but enjoyable obsessions of finding rare birds and making bird lists, the abstract technical challenge of conferring with experts and pouring over photos and texts to make a conclusive identification was also a great deal of fun. While the excitement of lists and the solving of tricky ID puzzles might seem like purely personal pursuits, these things do have a deeper meaning. The story of the Charwell meadowlark illustrates the private joy that draws thousands of people into birdwatching, people who through the hobby become more aware of the natural world, and conscious of its need for protection.

The story also points to the importance of photography in bird identification. In the field, even through binoculars, the Charwell meadowlark appeared mostly as a small brown blur. Digital photographs allowed me to freeze and zoom in on individual feathers. Without this ability to distinguish key field marks, I would have recorded the bird as an Eastern Meadowlark. This illustrates another lesson from the sighting, the dangers of common-sense presumptions. Misidentification often involves mistaking a common bird for a rare one, but the Charwell meadowlark reminds us of the opposite problem – the dangers of passing off a rare bird as a common one. Most late summer/early fall meadowlark sightings in eastern North America are recorded as Eastern, a feather-by-feather examination of every individual being impossible. By probability alone, most of these birds are Eastern, but as the Charwell record indicates, not all are. Does this make a difference?

Eastern Meadowlark is officially classified as Threatened in Ontario, meaning that while the species is not endangered, it is likely to become so if steps are not taken to address the factors undermining its numbers.[4] Western Meadowlark is also in trouble in Canada. There have been steep declines in its core range,[5] and a previous expansion of its nesting territory east into Ontario has now fallen back.[6] With the populations of the two meadowlarks clearly in flux, a small but important part of ensuring their survival will be monitoring their migration patterns. So, now when I am out in the field I am taking a closer look at meadowlarks. Yes, I will be revelling in the identification challenge, and looking to add another bird to my year list. I will also be seeking data that helps map the comings and goings of these beautiful and interesting species, data that can be used to protect their populations and the habitats critical to their long-term success.

[1] Prince Edward County is located at the northeastern end of Lake Ontario in Ontario, Canada