Undeterred by overnight showers, eight members of the Moses Hudgin House Restoration Committee gathered on Saturday, June 26 to get the House ready for restoration.  We were delighted to have among the morning crew three members of the extended Hudgin Family and in the afternoon one Hudgin family member.  Both Glen Hudgin and Bonnie Allen spent summers at the Hudgin house growing up and were able to point out significant places and tell us stories of their time in the House. Also part of the crew was Laura Edge, Glen's daughter and the administrator of the Hudgin family Facebook page and keeper of family and House history.

We started in the inside of the house and removed all the lumber that had been stored there over the years since it became uninhabited.  Restoration architect Edwin Rowse was able to classify items as “keep, garbage or burn”.  The “keep” items will help us with an authentic restoration or be artifacts to be displayed in the house, so when in doubt we kept.  We filled Hudgin descendent, Tracey McBride’s truck with household items to save which were stored in Janice and Gord Gibbins’ barn for safe keeping.  Included was an old and very rusty wood burning stove.  Although it is not usable, Edwin plans to restore it as an interesting artifact of the times when most houses were heated with wood. Then we filled Tracey’s truck with garbage which was delivered to the Picton dump.  A large pile of decayed but burnable lumber was created by the roadside for use by Dick Bird in his maple sap evaporator.  One item uncovered was a section of “gingerbread” wooden house decoration.  Edwin identified it as from the Victorian era and noted that it is unlikely to ever have been used at the House.  It remains a mystery why it was in the House or where it came from. 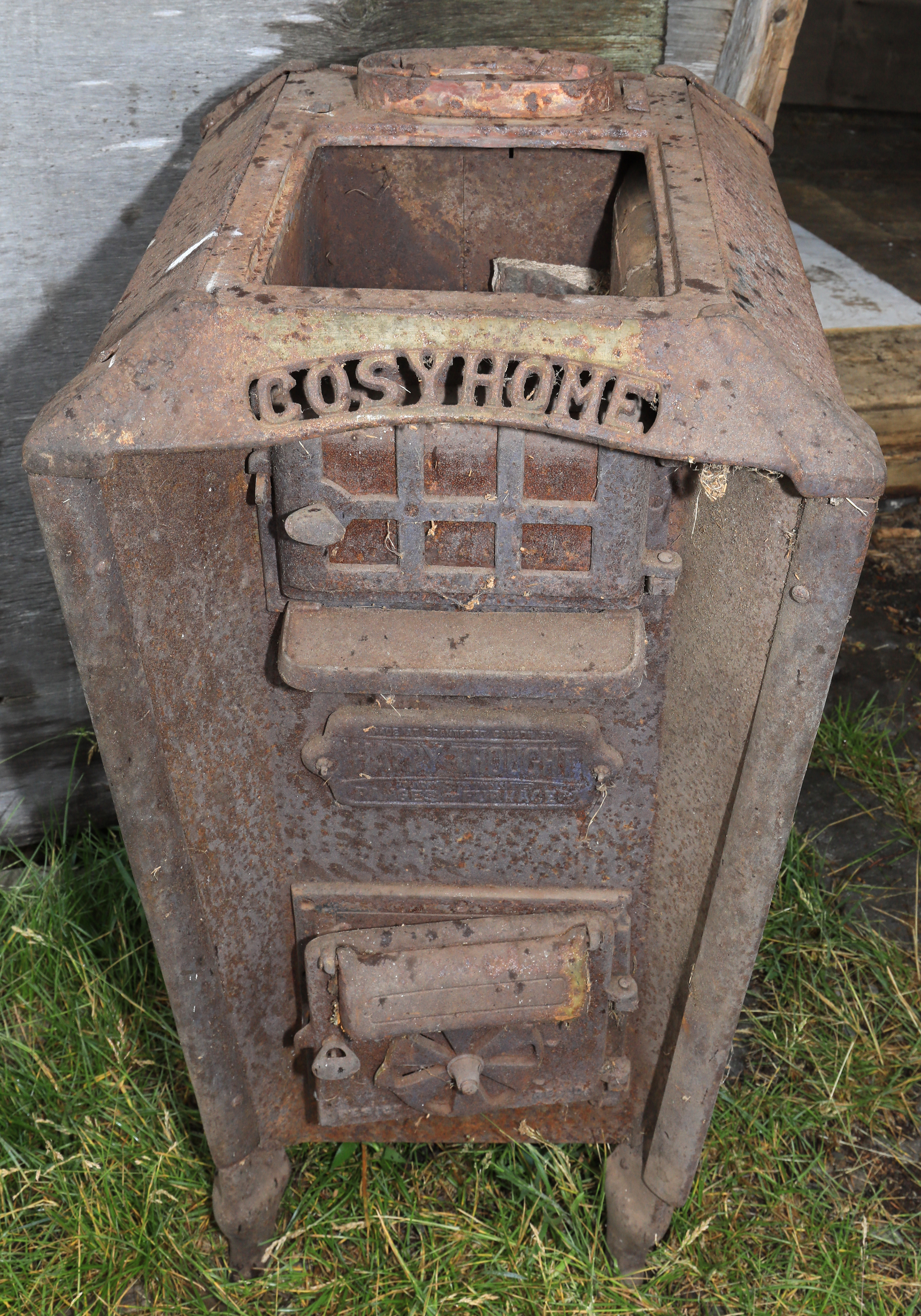 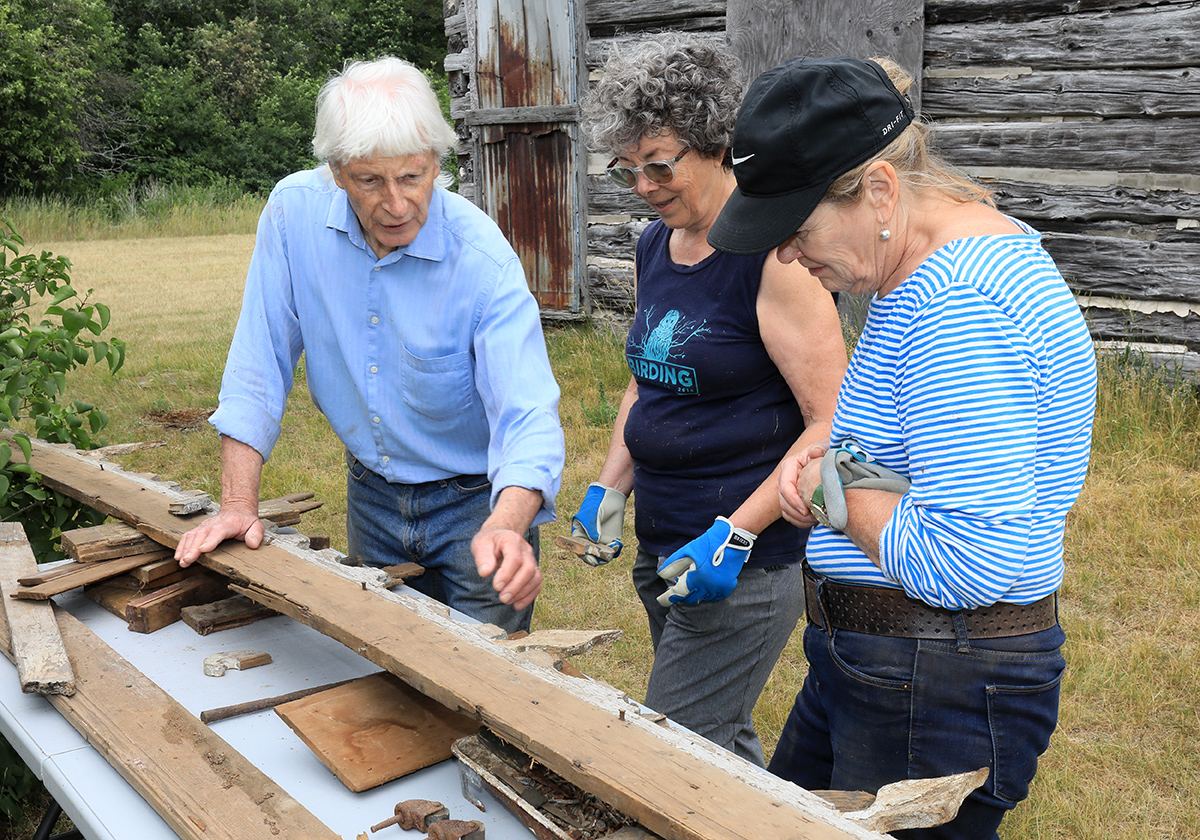 In the afternoon with a refreshed crew, we started on the fallen wall at the back of the House, which was highly decayed but still holding together.  The wall was originally part of the kitchen addition.  As we removed layers wonderful reminders of decoration emerged.  We found painted portions which gave good representations of the colours used.  There were two different patterns of wallpaper which Edwin will be able to have dated.  In between the outer and inner walls there was a layer of canvas to seal against drafts and moisture.  Of particular interest were two pieces of newsprint, one from 1888 with the masthead Montreal Weekly Witness and one from 1889 telling the story of the sinking of the schooner Blanche in Lake Ontario off the Cobourg Shore. These pieces will help to date the construction of the kitchen addition, which site evidence indicates came later than the house. The pieces will be very carefully preserved.  Of particular interest to this nature lover was a good sized Blue Spotted Salamander hiding under the lowest level of planks. 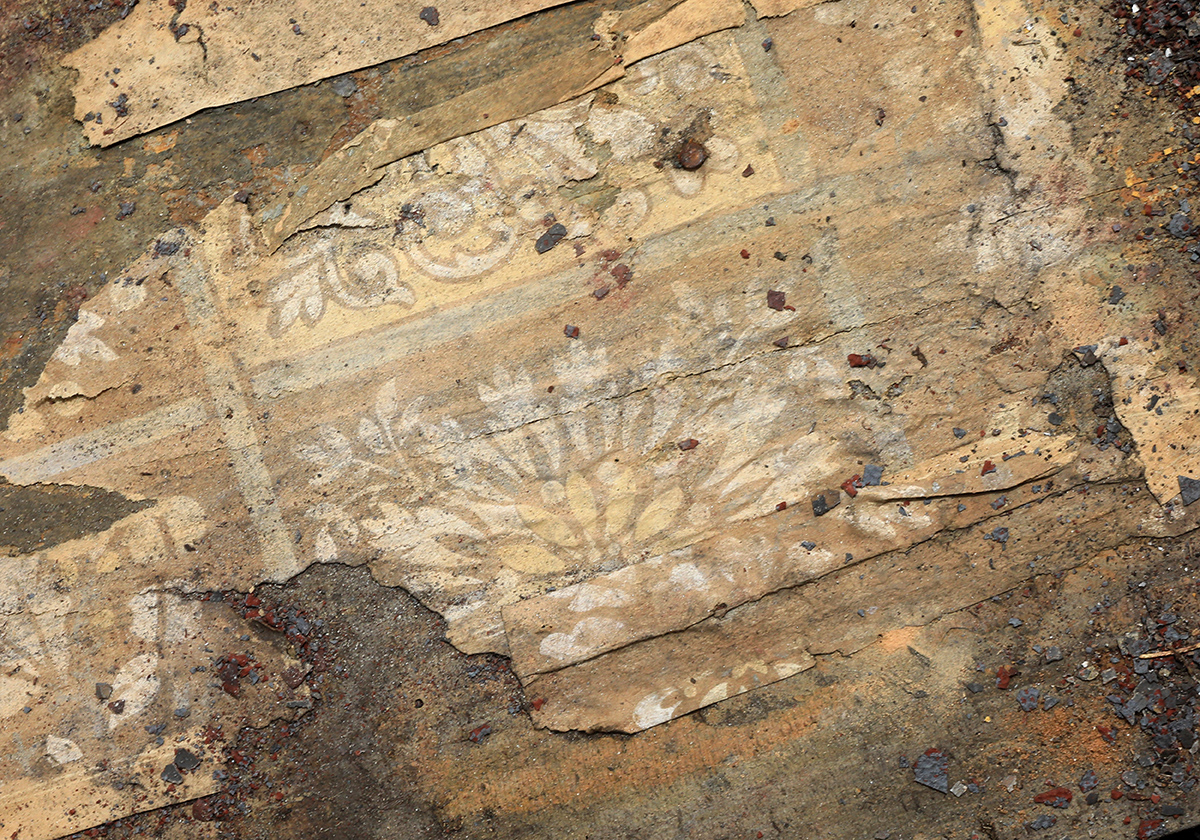 Photographer and videographer John Brebner was busy all day documenting our activity.  John lives in Ottawa, and we are indebted to him for the travel and work involved in documenting the Clean Up. Kevin Flynn has worked with his metal detector over the grounds surrounding the House and uncovered various interesting remnants of household and farm implements.  Of interest in the recovered items were several sleigh bells that would have come from the harnesses of the Hudgin horses. All these items will ultimately be used in telling the story of the House and the Hudgin family. 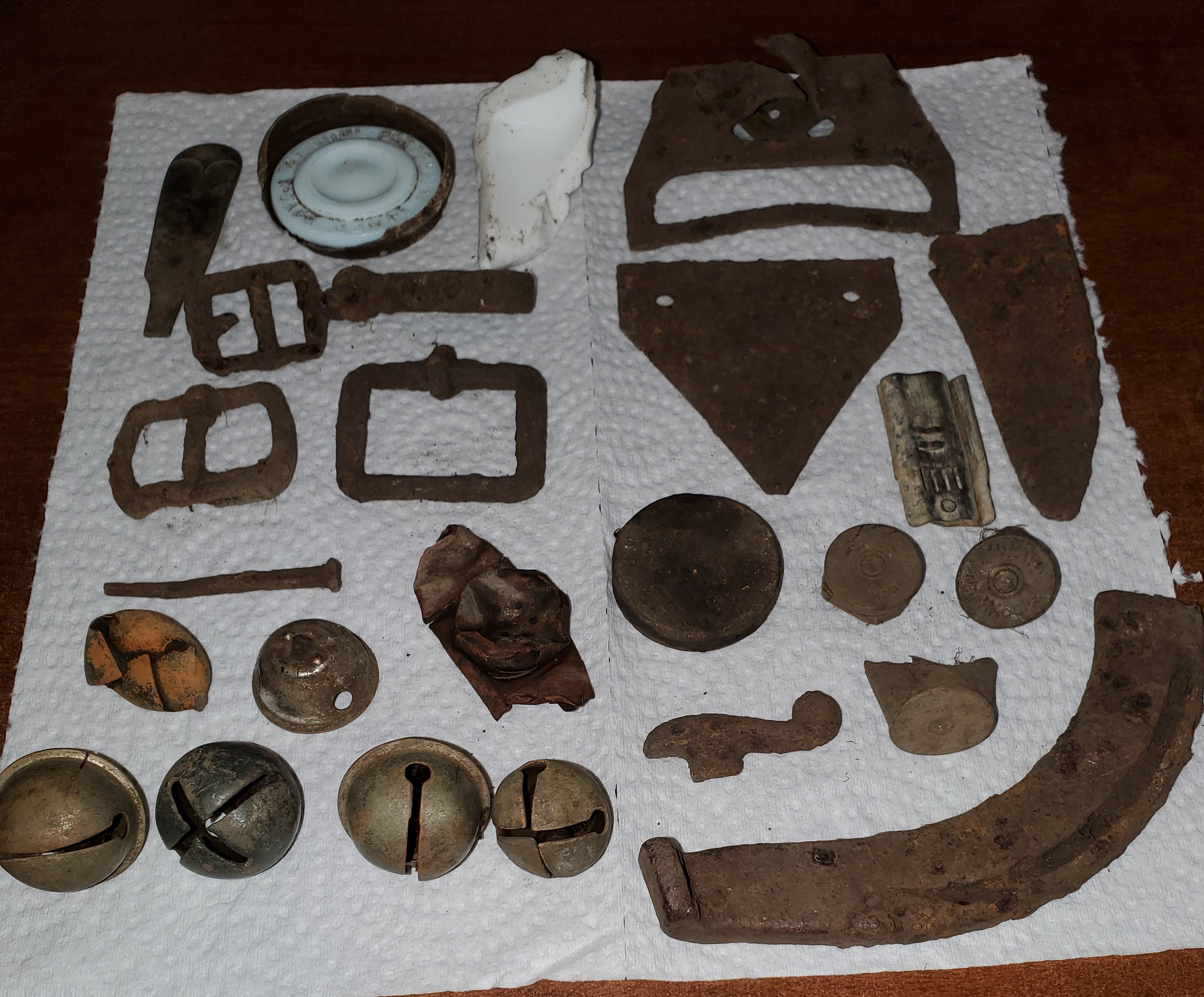 some of the items found by Kevin Flynn (photo K. Flynn) 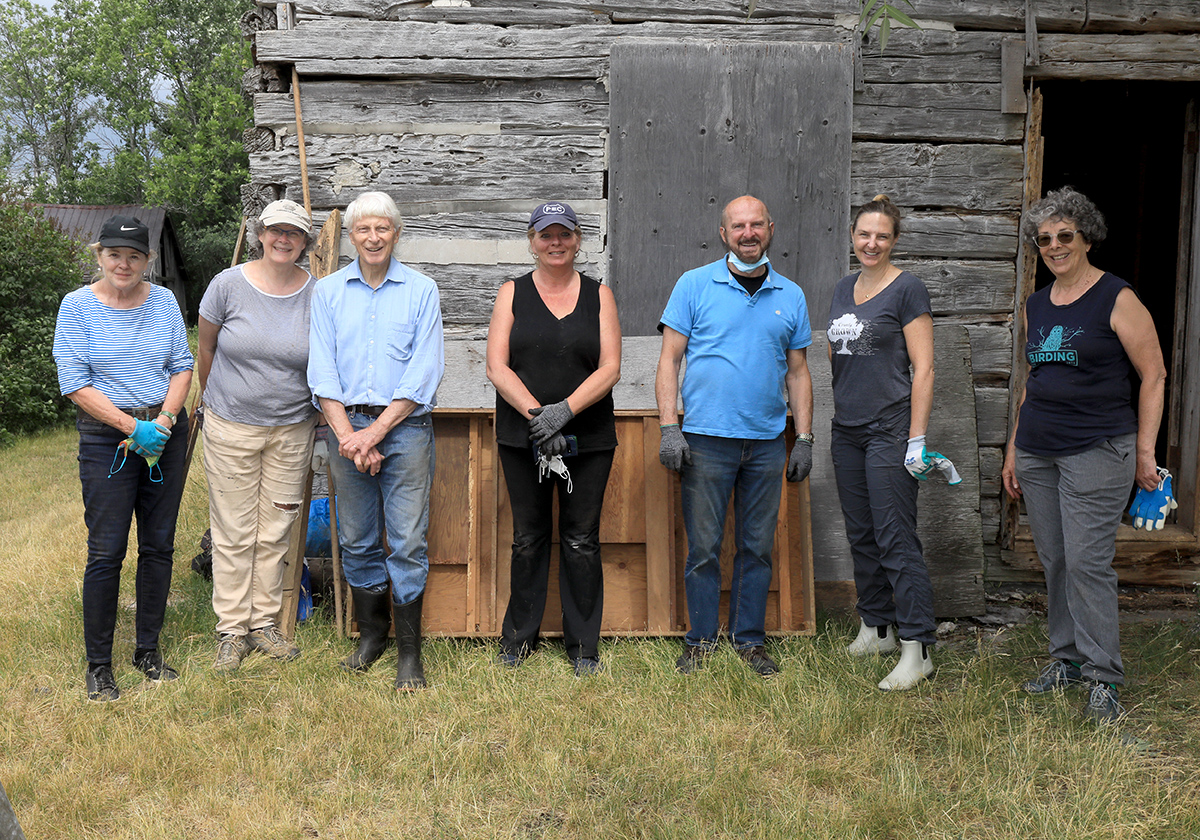 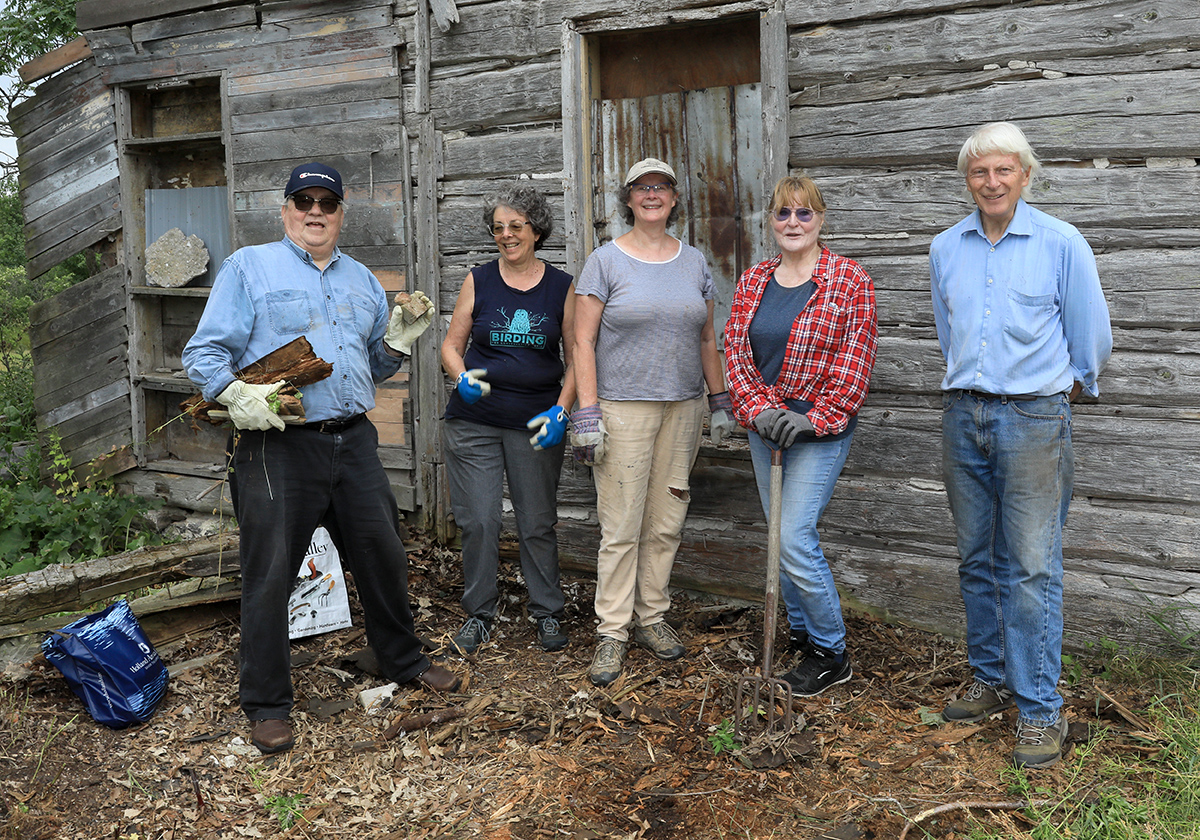