“There’s another one” “I found one of those other kind over here” Voices rang out over the Milkweed meadow on the Ostrander Point Crown Land Block as we searched for and found Monarch and Milkweed Tussock Moth caterpillars on the Milkweed plants.

Flight of the Monarch Day is presented by Monarch Nation and is a nationwide event to recognize the iconic Monarch butterfly.  South Shore Joint Initiative joined the celebrations of one of North America’s most cherished Insects on Saturday afternoon, August 22 by inviting people to help find Monarch caterpillars in the Crown Land Block meadow.

In 1995 Prince Edward Point was designated an International Monarch Reserve – one of three in Canada.  Every year we watch the beautiful orange and black butterflies as they gather near the shore to begin their long-distance migration flight to Mexico.  Before that however, these long-distance migrants have gone through metamorphosis from egg to caterpillar to pupa to new butterfly.  The early egg laying adults feast on the nectar of the Milkweed plant.  Both Common Milkweed and Swamp Milkweed are plentiful in the County and provide necessary nectar nourishment for the adults.  Their leaves sustain and grow the caterpillars.  Unfortunately, Dog Strangling Vine has been introduced and is taking over in many places along the South Shore.  It is a Milkweed relative and sometimes the Monarch adults are fooled into laying their eggs on its leaves.  The leaves of Dog Strangling Vine offer no nutrition to the caterpillars and so unfortunately any that hatch on those plants will die.

The meadow we chose in Ostrander Point Crown Land Block has about 100 Milkweed plants in the ½ acre plot.  There are also plants all along Ostrander Point Road.  Our group of about 30 individuals varied from small children to “mature” adults.  We looked at all the plants, turning over the leaves and taking photos of the colourful caterpillars.  The Tussock Moth caterpillars have similar colouring to the Monarch caterpillars but are very fuzzy with prominent black bristles at each end.  Ultimately, we discovered ten Monarch caterpillars.  I stopped counting the Tussock Moth caterpillars – there were too many!  We also saw lots of Milkweed beetles – black with a red x-shaped mark on their back.  Of particular note was a very cute little Tree Frog – he was bright green to blend into the Milkweed plant he was perched on when we found him. 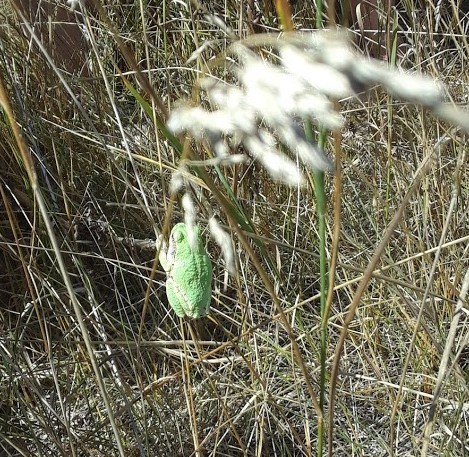 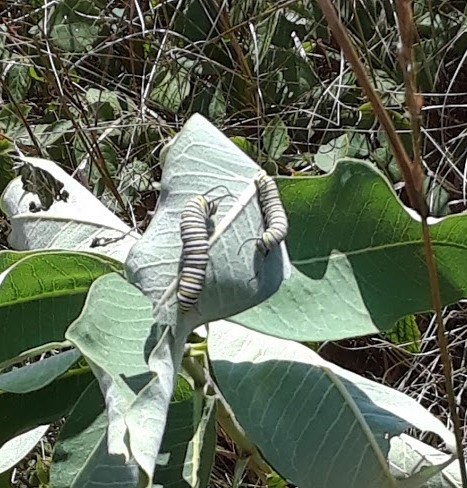 The dry conditions meant that there were very few plants in bloom which did not bode well for seeing adult butterflies; however, we did find two adult Monarchs and a Giant Swallowtail.  Along the road we also found two Viceroy butterflies giving us the opportunity to point out the differences between that species and the Monarchs.

Our groups met at the Moses Hudgin Log House and it was there that Cheryl Chapman of the Get Out Kids Club had a display of pollinator watering stations and Monarch themed activity kits for kids of all ages.  The Hudgin House is owned by Nature Conservancy of Canada. Summer intern Jill Batelaan was there with a display about the Conservancy’s work particularly in the South Shore.  Participants were also invited to pick up information about Prince Edward Point Bird Observatory, Prince Edward County Field Naturalists, Hastings Prince Edward Land Trust as well as South Shore Joint Initiative.

Very special thank you to Peter Fuller and Terry Sprague who led the walks and shared their wide and varied knowledge not only about Monarchs but also the many other species of plants, animals, insects and birds that make their homes on our South Shore.