In the spring of 2020, Charwell Point on the southern shore of Prince Edward County, Ontario, Canada was identified as an important stopover site for migrating shorebirds.[1] From March through June 2021, the location was surveyed again, with observers encountering an even greater abundance of these special birds. This work confirmed Charwell’s status as a shorebird staging area, and as an excellent place to monitor their passage through the eastern Lake Ontario region. Interesting records were also obtained for a range of other birds, underlining the importance of protecting this special site. 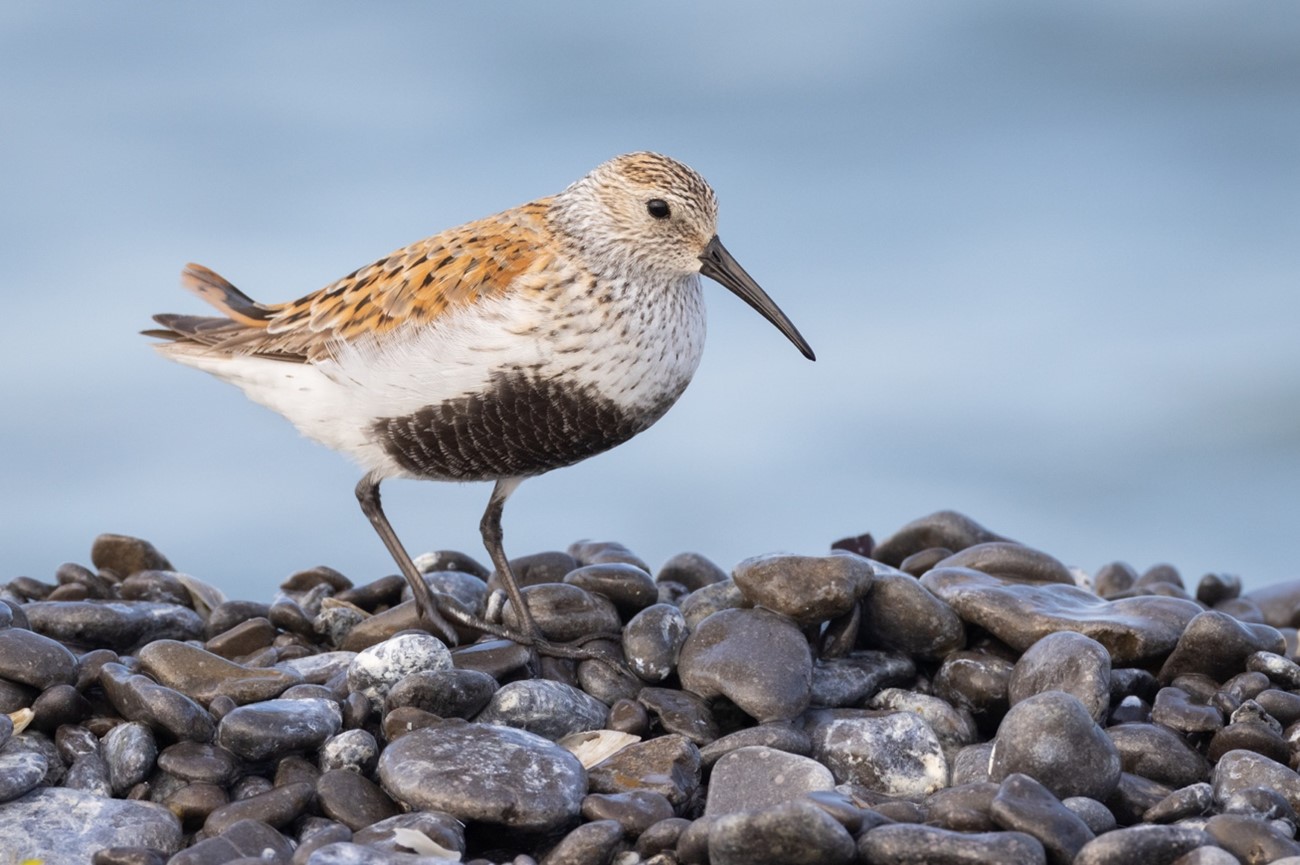 Shorebirds, an attractive avian family made up of various types of plovers and sandpipers, are under threat from a variety of hazards, including habitat loss.[2] In the past, knowledge of their spring migration through Prince Edward County was limited, with a lack of information on the places where they congregate and feed hampering efforts to protect their numbers.[3] The spring 2020 identification of Charwell Point as an important site for shorebirds, helped to start to close this knowledge gap. Data obtained in spring 2021 has added new information to patterns of bird migration and should spur conservation efforts. 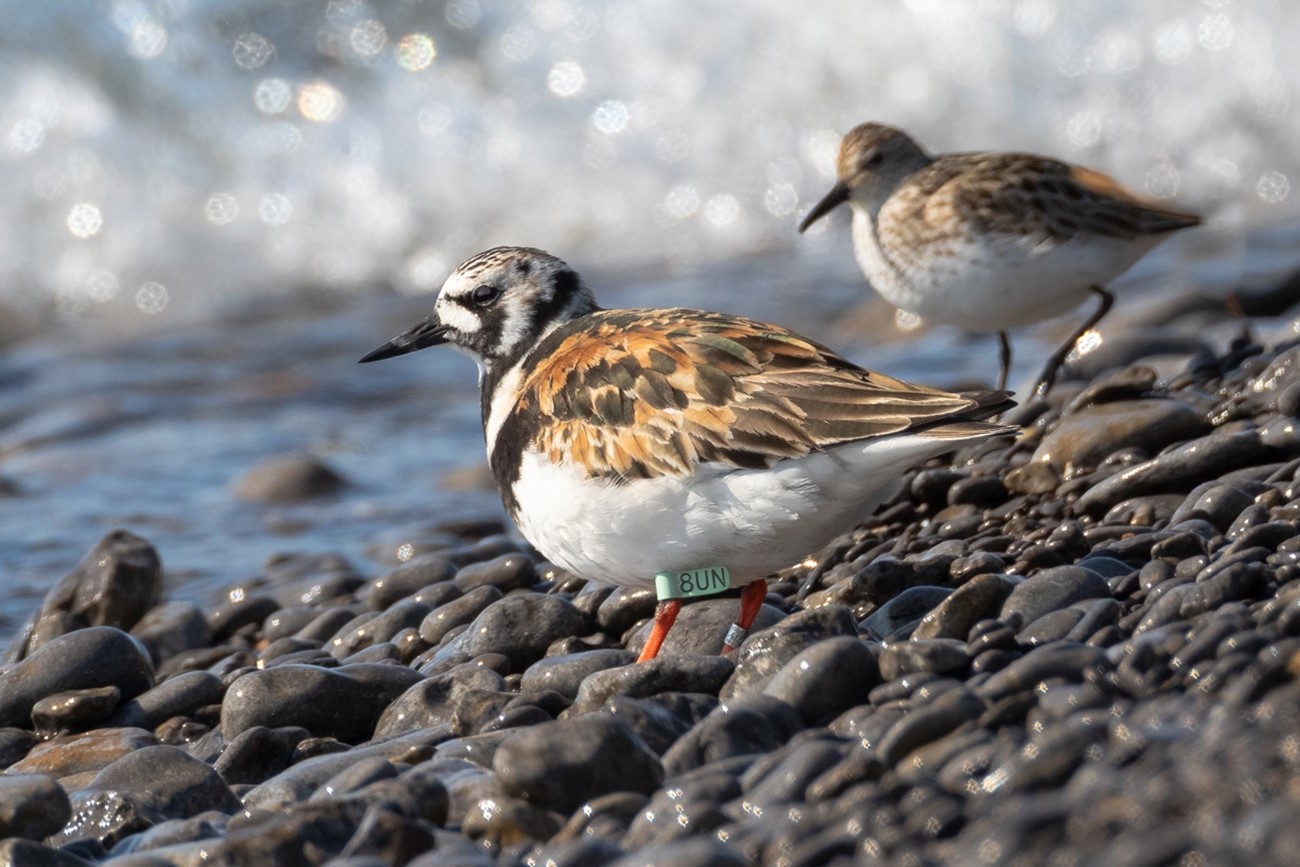 Shorebirds are drawn to Charwell by its long, undisturbed beaches and expansive gravel flats, formations rare elsewhere in The County. The promontory is also one of the first visible landfalls on the southern shore, presenting a welcoming sight to exhausted birds crossing Lake Ontario. In 2020, on 13 visits in late May and early June, over 500 individual shorebirds of 10 different species were recorded. In spring 2021, coverage expanded and on 68 visits between March 7 and June 10, numbers increased to 1313 individuals and 14 species. Monitoring usually began at dawn, and typically lasted two to three hours. Upon observer arrival, shorebirds were often already present on the beach; or would fly in off the lake and circle the area before landing. Inclement weather, either during the visit or the night before, correlated with increased numbers of sightings. Sometimes birds would remain at the point for several days. Other times their stays could be measured in hours or even minutes. With observers typically staying within the last vegetation on the tip, disturbance from monitoring efforts appeared to be minimal. Occasional aggressive behaviour by gulls towards shorebirds attempting to settle on the tip was noted.

The first shorebirds to arrive in spring 2021 were the common and expected local nesters, with Killdeer, Wilson’s Snipe, and American Woodcock all present by mid-April. Four Greater Yellowlegs on April 27 were the first passage migrants, birds moving from their southern wintering grounds to nesting territories far to the north of The County. The boreal, sub-arctic, and arctic destinations of these long-distance flyers can be ice-bound into June, so their main migration period begins relatively late in the spring. Consequently, the next passage birds were not seen until May 15, with the sighting of three Least Sandpipers and one Lesser Yellowlegs. May 22 brought 160 Dunlin, marking the first big flock of the season. The 25th saw 178 Whimbrel pass through, a spectacular number of this large, charismatic and far-travelling species.[4] Migration peaked on June 1 with 276 individual shorebirds of six different species, including 18 Red Knot. On June 10, the final day of monitoring, one Semipalmated Plover and one Semipalmated Sandpiper were seen. Comparing this year and last, more than 800 additional individuals, and four additional species were recorded in 2021, an increase best explained by the higher level of monitoring. 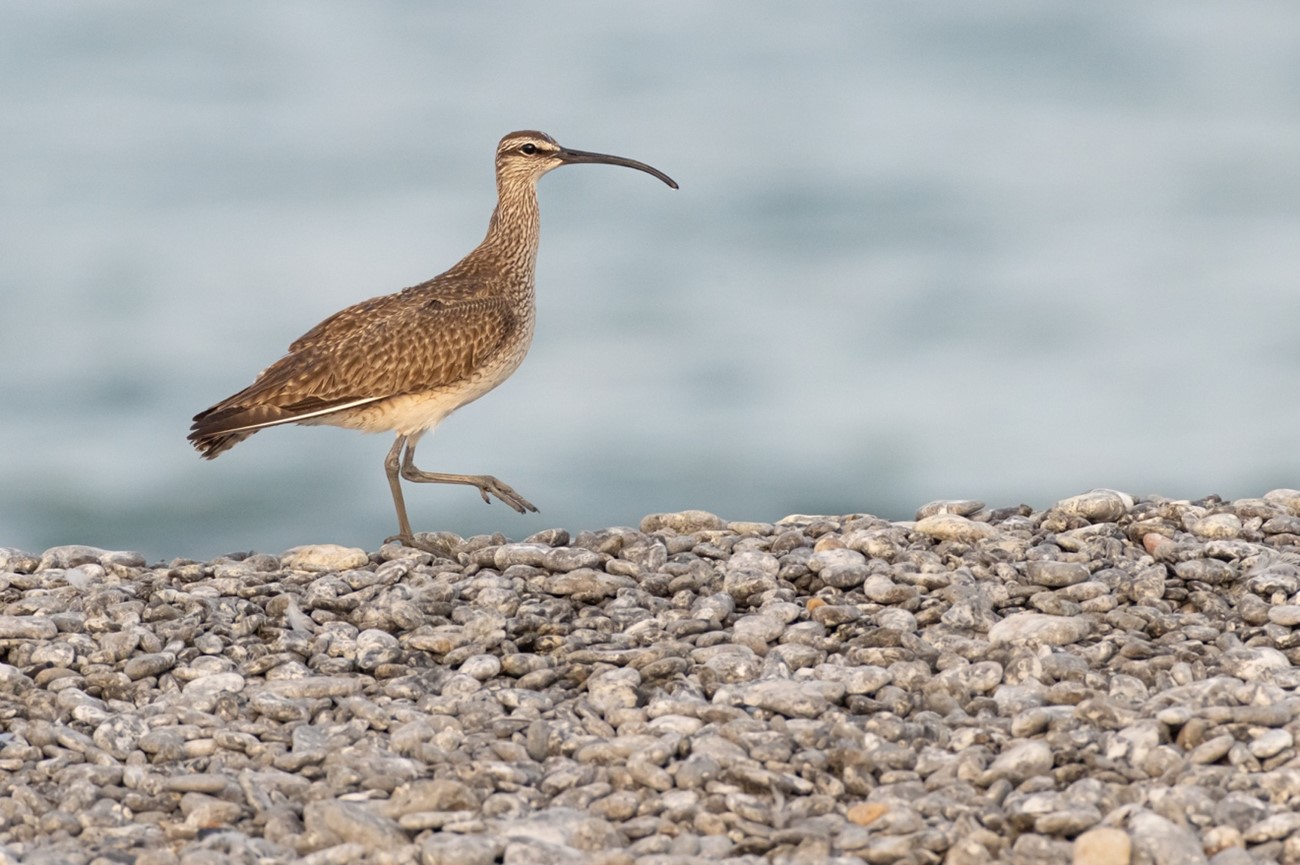 Other 2021 Birds of Interest

A pair of Trumpeter Swan were present the entire monitoring period on Gull Pond, a significant wetland at the base of Charwell Point. Through April, large numbers of Bonaparte’s Gulls built up on the waters off the point, peaking at an estimated 3500 birds on May 2. Accompanying them were at least three adult Little Gulls, a rare, enigmatic species whose breeding colonies in southern Ontario disappeared in the late 1980s.[5] The adult Little Gulls departed mid-May and were replaced towards the end of the month by a group of eight sub-adults who were still present at Charwell at the end of the monitoring period. 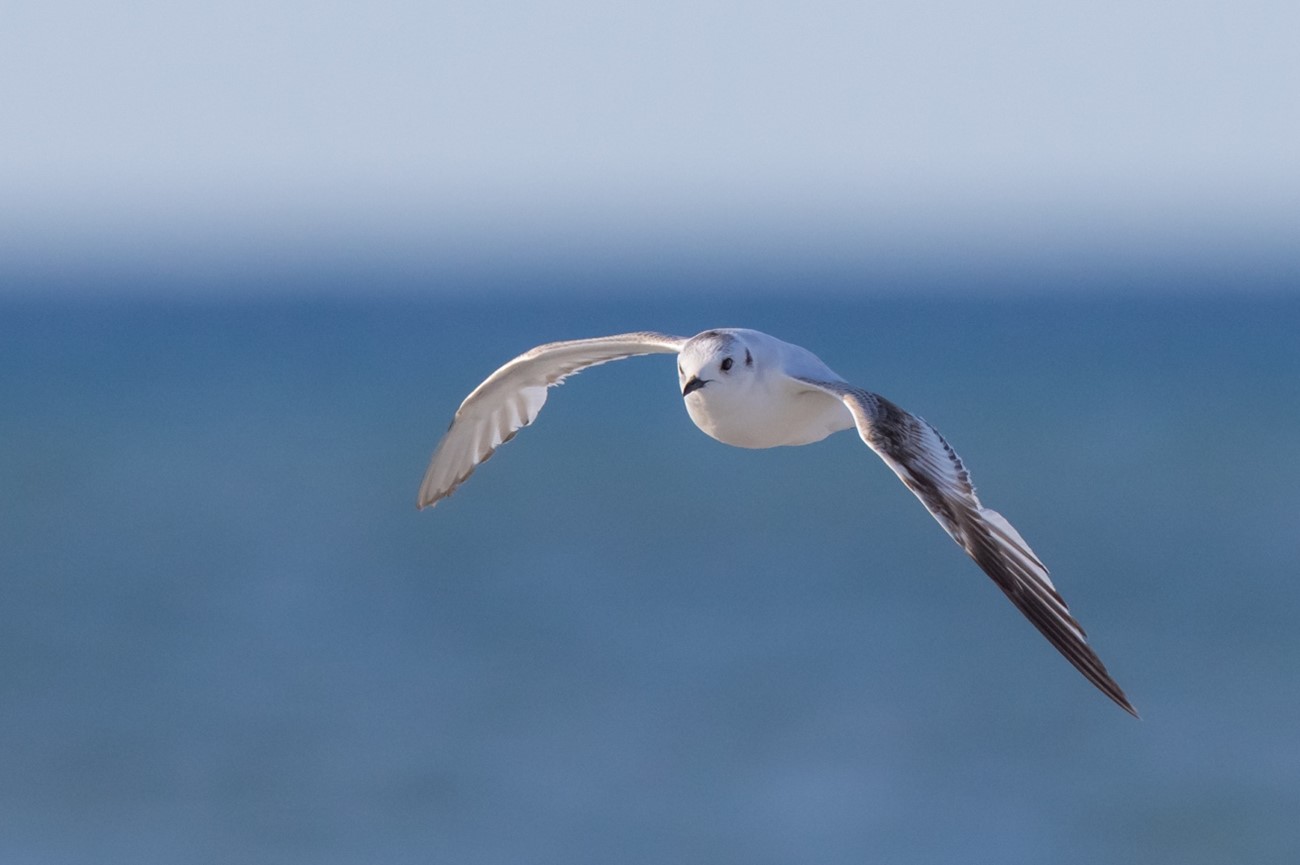 The tip of Charwell Point and beaches to its east and west were also important resting areas for hundreds of Ring-billed Gull and Herring Gull, many in sub-adult plumages. Small numbers of Caspian Tern, Common Tern, Lesser Black-backed Gull, and two late Iceland Gull were also seen. Abundant Round Goby and Alewife were visibly present in the waters directly off Charwell through mid-May to early June and may partially explain the abundance of gulls and terns.

Between May 22 and June I, twelve Red-throated Loon, considered rare in spring in Prince Edward County, were seen migrating past Charwell. Two Brant, another bird that migrates from the US east coast to the arctic, graced Charwell on May 21. A sub-adult male Barrow’s Goldeneye (May 16) and a Snowy Egret (May 17), birds considered rare across all of Ontario, affirmed Charwell’s reputation as a birding hotspot and were a nice reward for the persistent efforts of birders at the location. 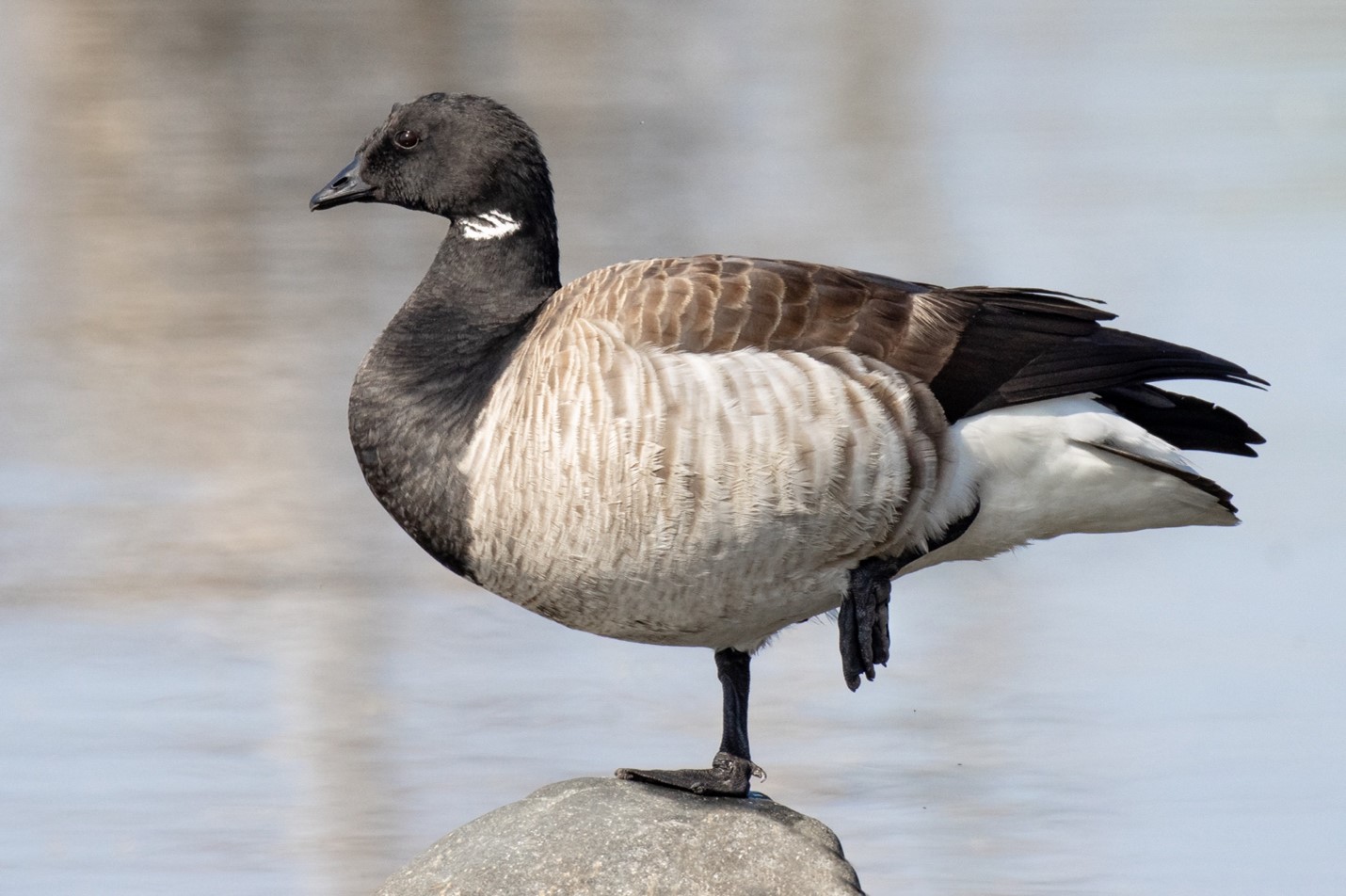 Charwell Point falls within the Point Petre Wildlife Conservation Area, and Prince Edward County’s South Shore Important Bird and Biodiversity Area (IBA). The south shore IBA is part of a larger program to conserve and monitor sites that provide essential habitat for Canada’s bird populations.[6] In addition to bird life, Charwell also hosts a wide array of other interesting and rare plant and animal species.[7] The discovery of the location as a rest and refuelling stop for migrating shorebirds further underlines the importance of its IBA and conservation status; and indicates additional study and protection efforts are warranted.

From mid-morning on, the point is subject to at times heavy shoreline ATV traffic, activity that disturbs resting birds and damages habitat. On May 22, 23, and 24, 2021 campers and their vehicles were present overnight in the tip area and on the beach just east of the point, behaviour not permitted in the Point Petre Wildlife Conservation Area. From late fall to early winter the point is a popular waterfowl hunting site, part of a long tradition in The County. In the spring the beach is littered with spent shotgun shells and the detritus of duck blinds cut from shoreline vegetation.

Efforts to publicize Charwell Point as a birding location will help diversify the range of outdoor activities that occur at the location, and provide a wider base of support for the protection of this special place.

Charwell Point[8] juts into Lake Ontario from Prince Edward County’s southern shore, twenty kilometres from Prince Edward Point to the east, and five kilometres from Point Petre to the west. The location has long been recognized as a good general birding site (“Best Places to Bird in Ontario” 2019, Kenneth and Michael Burrell)[9]. As the most prominent feature on the otherwise gently curving southern shore, Charwell is fairly easy to pick out on a map. However, as one of the remotest locations in The County, access to the area requires a bit of work.

The quickest route is via Charwell Point Road, an extremely rough track running south off Army Reserve Road about one kilometre west of its junction with Dainard Road (Dainard runs south off Royal Road 2.25 kilometres from its junction with CR10 to the east, or 5.15 kilometres from CR24 to the west). Once you have found Charwell Point Road, travel it carefully 1.6 kilometres to a sharp right turn to the west. Continue west 650 metres from the turn and look for the, parking spot on the left, and a (sometimes flooded) trail that leads 250 metres south to Lake Ontario. Upon reaching the lake, walk west along the beach one kilometre to the tip of the point. Charwell Point Road continues past this access route and dead ends at a wetland called Gull Pond. Depending on water levels, it is possible to ford the pond and reach the base of Charwell Point, but the route discussed above is a far more reliable option.

Note - Charwell Point Road is very bumpy and is best attempted in a vehicle with high ground clearance, and by a driver tolerant of scratched paint on their vehicle (thick brush encroaches heavily at the road edge). While some off road-capability is preferred, people have made it through in ordinary passenger cars. Rather than risk driving, many visitors park at the junction of Army Reserve and Charwell Point Road and walk south to the shore (a 6.5 kilometre round trip). A hybrid approach is to drive the more manageable first 750 metres, park at the obvious gravel pullout on the right (look for the dumped car seats) and continue the rest of the way on foot. A last option is to turn right (west) at the car seats and continue on the gravel road southwest approximately one kilometre past one clearing to an even larger clearing. At the big clearing the road continues west, but take the track that winds southeast 525 metres (follow the left fork at 360 metres) to Charwell Point Road. Proceed west (right) about 100 metres along Charwell Point Road and you will see the parking spot and shoreline access trail described above. The advantages of this route are that it is not as bumpy and has far less paint-scratching vegetation. The disadvantage is that it can be impassably flooded.

Caution - Charwell Point is a remote and often lonely location. If you plan to visit, it would be best to inform people of your itinerary, and travel with at least one other person. High rubber boots are a necessity in early spring, and advisable at all other times of year. Water levels in the lake and surrounding wetlands can vary greatly. The shoreline itself is subject to dramatic storm-related alteration, with shifting beaches and downed trees affecting access. In the spring of 2020 high lake levels presented a particular challenge. In 2021, with water levels lower, reaching the point was easier.