The first week of work on the log stabilization of the Hudgin Log House restoration has been very successful. The Pat Wolfe Log Building School from Almonte, Ontario made good progress and the house is already structurally stable again, with all joints tight and screwed together. The Log Building School team – Stuart and Paul - is very skilled, knowledgeable, alert to the heritage conservation issues and delightful to work with. Many subtle repair issues which will affect the durability and protect the heritage value of this designated building were discussed on site with Edwin Rowse, the heritage architectural consultant. Edwin has taken many photos which he will share. John Brebner from Ottawa was at the site and has taken photos and video.

Photo #1: Before and After: note how the logs now align and how plumb the corner is.  The joints have been closed and the lap joints fully lap again. At the window to the right (out of sight), the logs have been tapped in to close a 1-1/2” gap down to ¼”. 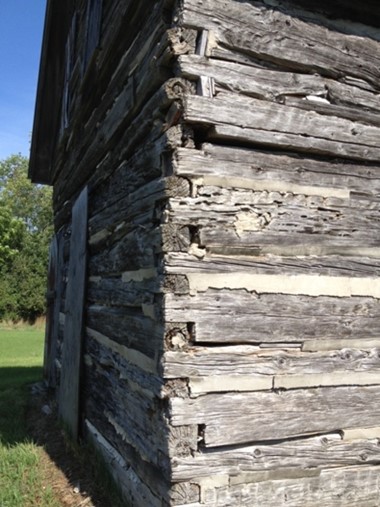 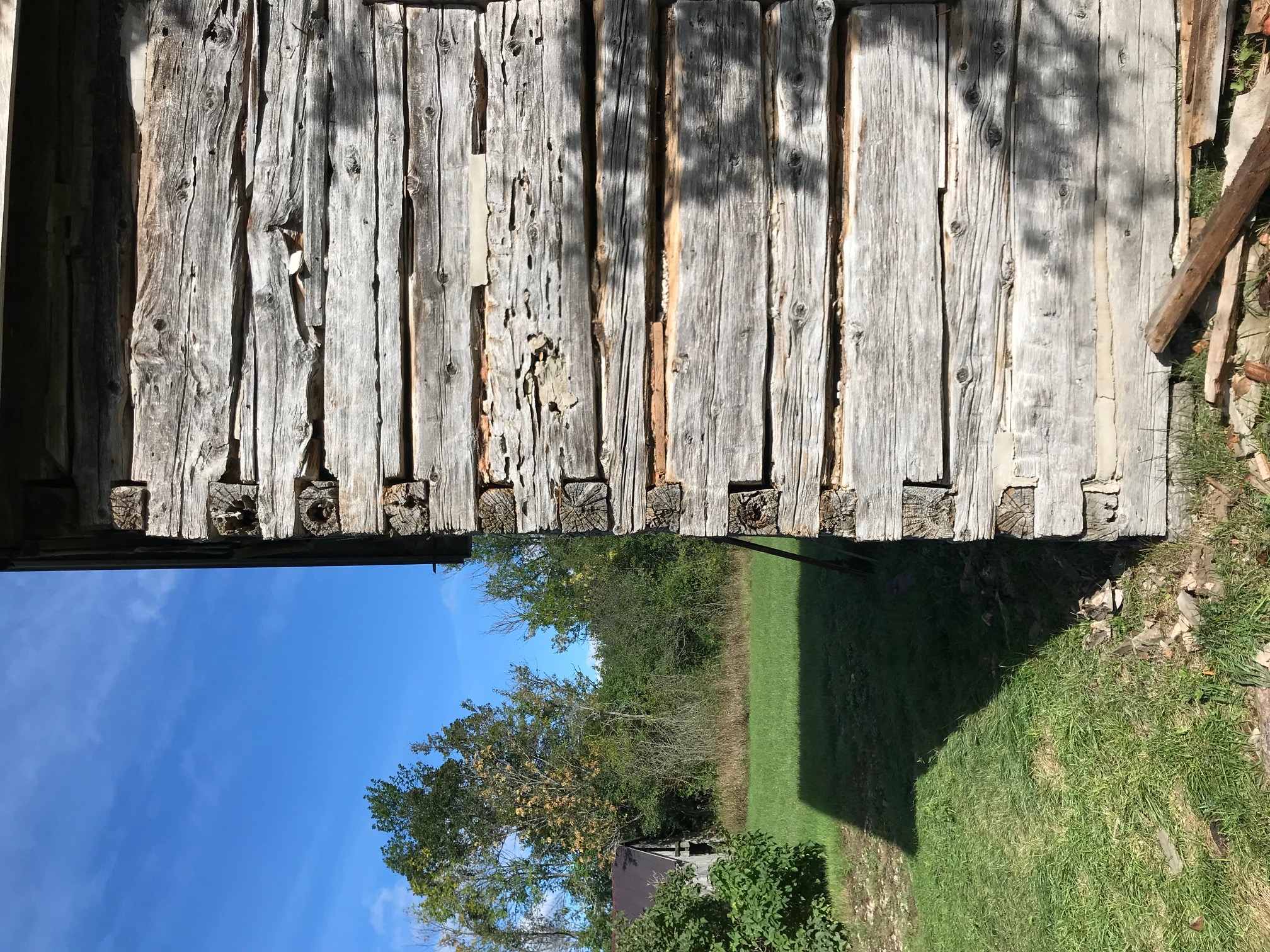 Photo #2:  the whole west wall is close to plumb except for the eccentric top 3 logs which have an outward bow in them.  It was probably built like this. 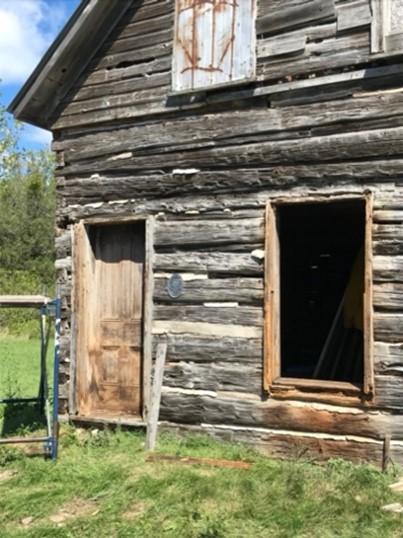 Photo #3: the paneled front door is in remarkable condition and will need little repair.  It is operational again and once the opening frame is repaired it will be very solid. Heavily oxidized reddy-brown paint at top of door was probably originally a darker red - possibly the colour showing as the dark tone in the c 1879 b-and-w photo of the west elevation 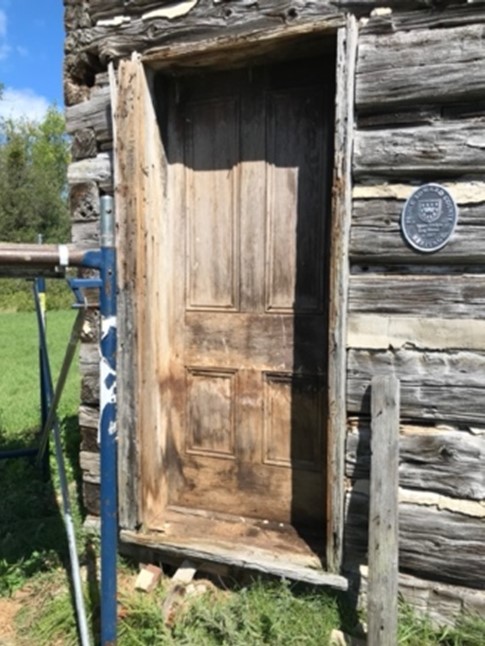 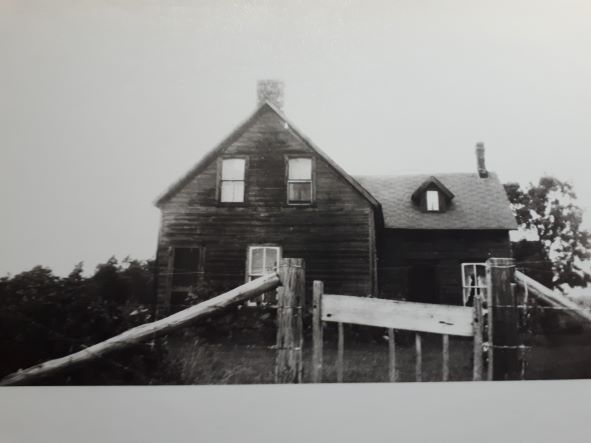 Photo #4: Originally a window, this opening has been a door to the kitchen wing since 1889. The slot for the sloping window sill can be seen just above the new framed apron to support the new window.  The door, frame and trim will be salvaged and store so that if ever the kitchen wing is rebuilt, this doorway will be re-instated and the new window moved to the new kitchen. 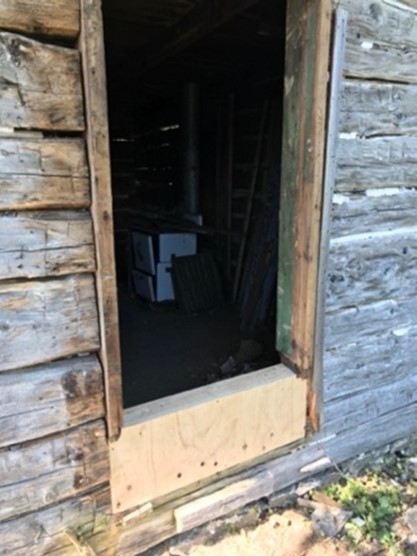 Photo #5: The robust 1889 woodwork shelving unit has been retained behind the new plywood and strengthened to stiffen this south-east corner, where the logs were cut away. It will be clad in wood siding to match the new siding in the gable above as a reminder of the kitchen wing. 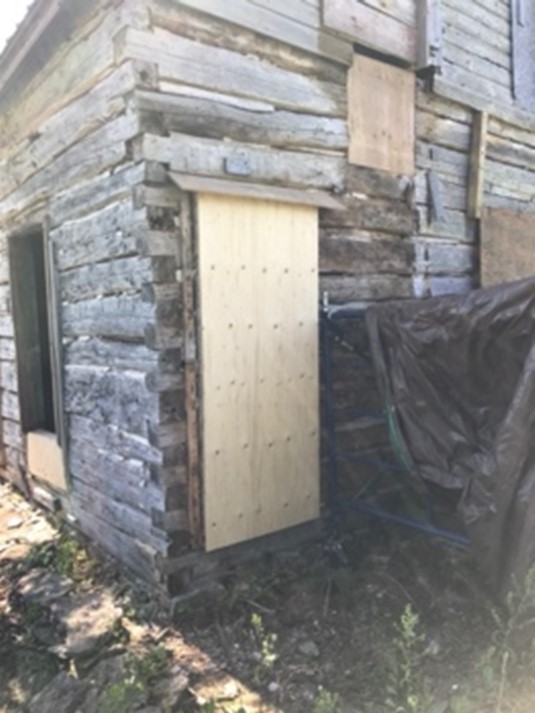 Photo #6: the top 3 logs at the north-east corner were projecting outwards for 4”. They have been re-aligned flush with the logs below and screw-fastened at the corner.  Note the old built-in shelving which now supports the south-east corner. 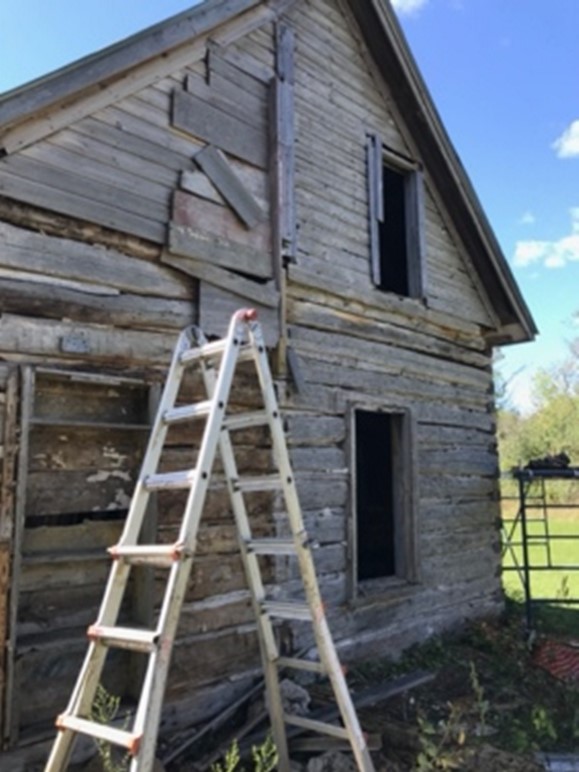 Photo #7: The come-along on the second floor used to temporarily hold the one end of a beam in place. 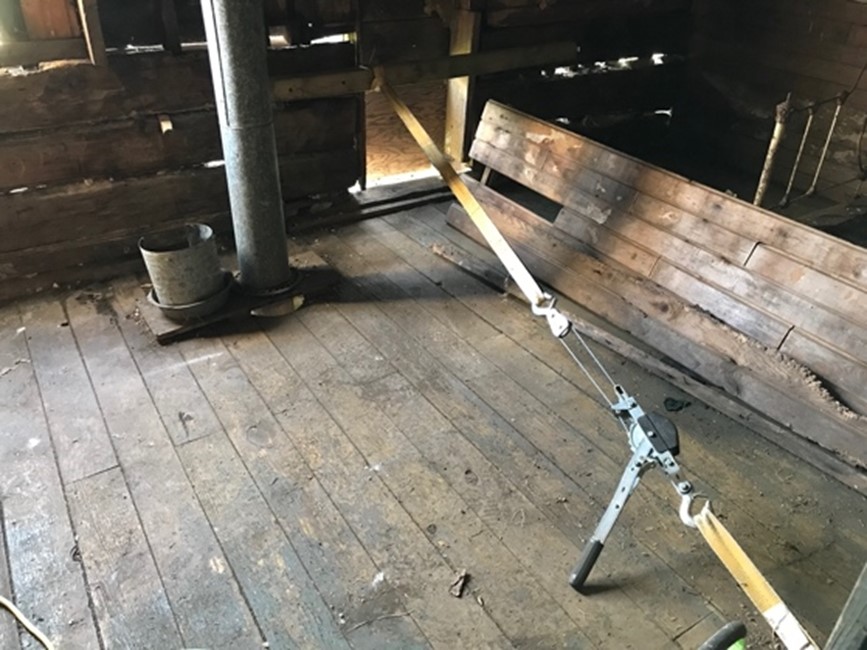 #7 One of two come-alongs holding beams in place

Photo #8: An oak dowel tying 2 logs together on the north elevation. Four dowels (2 of them in the photo) have been located so far. There is also evidence of iron spikes, long snapped by log movement and corroded to dust.  Spikes may have been sparingly used because they were relatively so expensive.  It was not uncommon when people were moving house to dismantle the woodwork frame and take the nails and discard the wood. 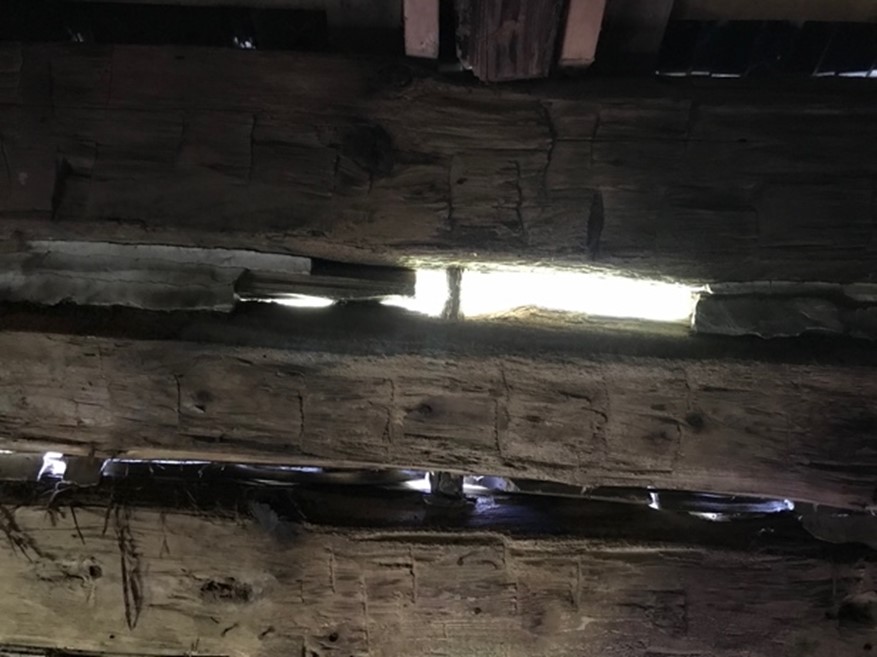 #8 Oak dowel in silhouette in open joint between logs