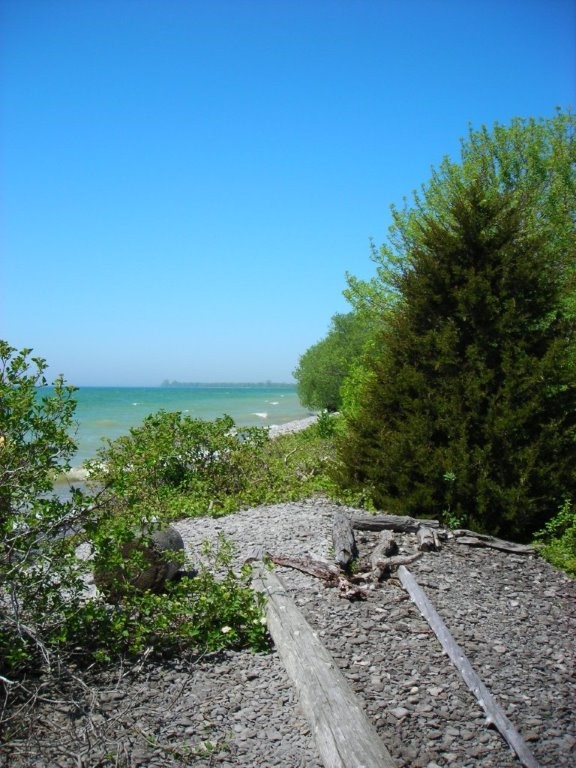 Conservation Reserve status is sought for Ostrander Point Crown Land Block and Point Petre Provincial Wildlife Area on the northeast shore of Lake Ontario.  The two provincial public areas are located within the Prince Edward County South Shore Important Bird and Biodiversity Area (IBA). The biodiversity value of the South Shore is very well documented and support for conservation is very strong locally and beyond. This proposal enables (1) existing wildlife policies and legislation to be addressed; (2) huge opportunities for natural education and engagement of the public in nature –related activities; (3) a potential contribution to various aspects of the human economy including millions of dollars in revenue from eco-tourism; (4) a significant contribution to terrestrial Ontario-wide diversity protection; (5) addresses and helps to mitigate climate change through protection of important natural habitat.

South Shore Joint Initiative (SSJI) is a coalition of individual members and partner organizations working to protect the Prince Edward County South Shore Important Bird and Biodiversity Area in order to maintain or increase the biodiversity of its terrestrial and marine ecosystems.

Members are Prince Edward County-based individuals who support the objectives of SSJI.  Partners are those individuals and organizations who wish to support particular objectives and initiatives of SSJI as part of the larger coalition to protect the South Shore Important Bird Area.

Location, ownership, and description of the South Shore Important Bird and Biodiversity Area:

Prince Edward County is at the eastern end of Lake Ontario west of Kingston between approximately 43.9370, -76.8590 and 43.8389, -77.1555. The South Shore IBA area includes 26 square km of land and 65 square km of near shore waters. The area includes three parcels of public land including Prince Edward Point National Wildlife Area, Ostrander Point Crown Land Block and Point Petre Provincial Wildlife Area (Fig. 1). Additional public land exists at Little Bluff Conservation Area owned by Quinte Conservation at Halfmoon Bay.  The Point Petre Antenna Site at the western end of the peninsula is owned by the Department of National Defense. The Miller Family Nature Reserve (MNRF) is a 491 acre property owned by the Hastings Prince Edward Land Trust approximately midway between Point Petre and Ostrander Point. Nature Conservancy of Canada has recently purchased the Hudgin–Rose property along the eastern side of Ostrander Point Road and the Brodeur Property to the immediate western side of the Ostrander Point Crown Land Block. (Fig. 2) Ducks Unlimited has recognized the significance of the area and has acquired two parcels in the vicinity of Gravelly Bay (Fig. 2) in additional to constructing two berms creating two large wetlands in the Lighthall Rd and Simpson Rd areas. The public lands correspond to approximately one-half of the South Shore area. The other half is privately owned, including 60 land parcels as well as many smaller shoreline lots.

The natural habitat is varied and includes open and treed alvars, meadows, savannah, woodlands, wetlands, marshes, shrub thicket. Most of these habitats are the result of natural succession on former marginal agricultural or logged lands.  Agricultural land use is not extensive and includes a mix of cattle or sheep grazing, with vineyards closer to Lake Ontario and some hay fields. The soils are very thin as a result of glacial scraping over limestone bedrock. The area of concern is in the Mixedwood Plains Ecozone in southern Ontario (Ecological Stratification Working Group, 1995) where biodiversity loss is greatest and loss is greatest and conservation opportunities are limited. 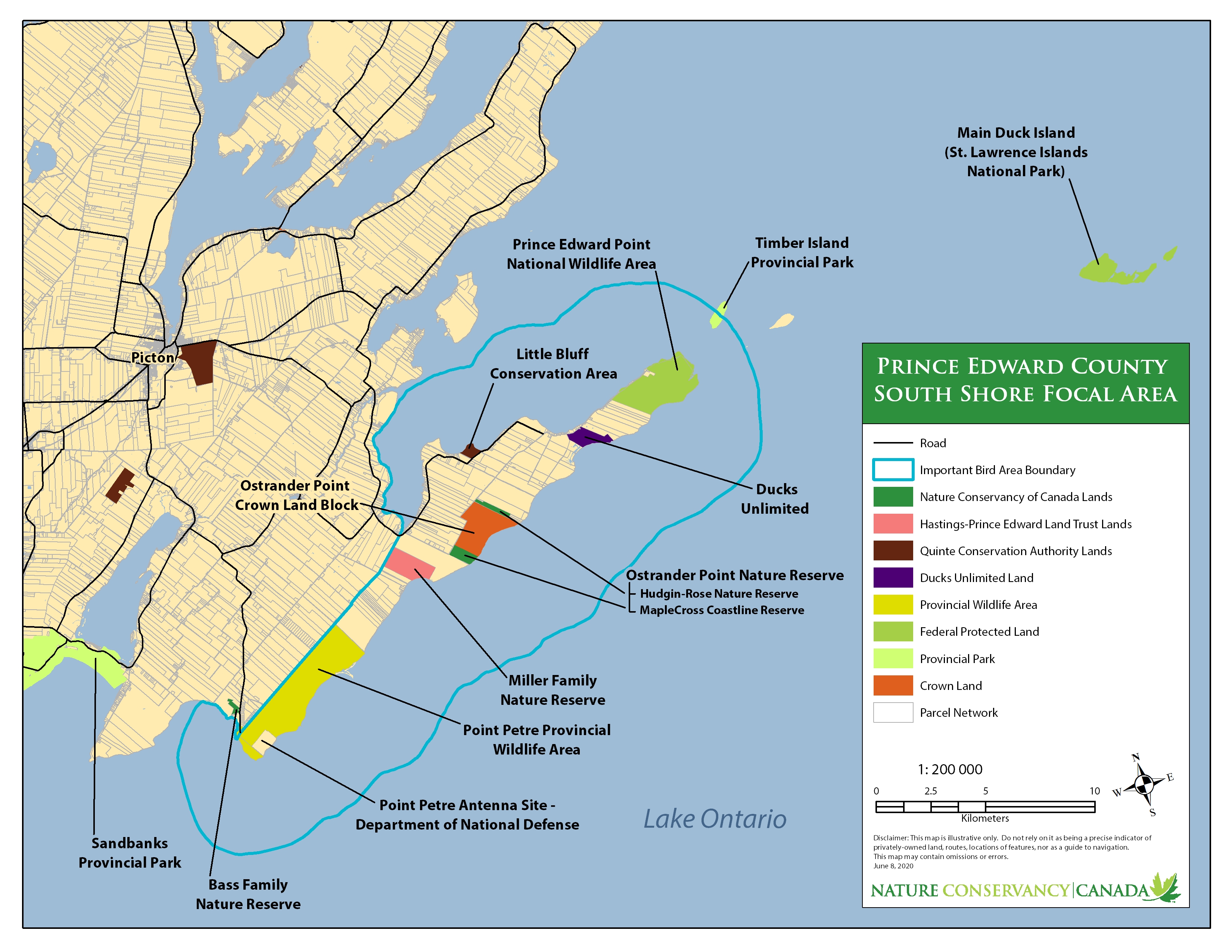 Six species of vascular plants present at Ostrander Point Crown Land Block alvar are rare and tracked by the Ontario Natural Heritage Information Centre and some of the alvar communities are globally imperilled. At least 28 regionally rare species occur on this property and others occur elsewhere in the IBA including some normally found only in the Carolinian Zone on the Lake Erie shore. The entire south shore is important for concentrations of migrating bats, butterflies and dragonflies. In 1995, Prince Edward Point was designated an International Monarch Butterfly Reserve as a result of its importance to migrating Monarchs.  The Point Petre Provincial Wildlife Area contains one ANSI one candidate ANSI and Provincially Significant Wetland complexes. The Ostrander Point Crown Land Block is bordered by a Provincially significant coastal wetland. The area is home to several species at risk including Blanding’s turtle (listed as threatened provincially and endangered federally).  At least 12 avian species at risk have been documented breeding in the south shore including wetland species: Least Bittern, grassland species: Bobolink and Eastern Meadowlark and insectivores: Eastern Whip-poor-will, Barn Swallow that are all experiencing significant population declines.  Of particular interest is the identification of nesting Canada Warbler (SARA Threatened and SARO Special Concern) in the Provincial Wildlife Area in 2018.  The South Shore is identified as an area of high biodiversity in the Draft CWS Ontario Landscape Conservation Atlas and Plan (Environment and Climate Change Canada 2017).

The biological importance of the South Shore has already been identified by the province:

Ontario Ministry of Environment Conservation and Parks: Preserving and Protecting our Environment for Future Generations: A Made in Ontario Environment Plan 2018